Tropical Storm Isaias is soaking the Mid-Atlantic states with what is expected to be three times as much rain as is typical for the area. Today’s heaviest tropical showers could trigger potentially deadly flash floods.
The projection is the finding of a new Intuitive Metric for Deadly Tropical Cyclone Rains, which we blogged about on The Front Page in June. The extreme rainfall multiplier (ERM) used the quantitative precipitation forecast (QPF) from the Storm Prediction Center last night to generate an ERM forecast for Isaias. 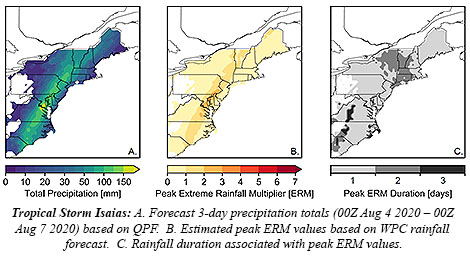 “Since Isaias is a fast-moving storm (currently moving NNE at 23 mph), the heaviest rain is forecast to fall with[in] a 24-hour period today (Aug 4)”, wrote the study’s lead author, Christopher Bosma, a Ph.D. student at the University of Wisconsin-Madison, in a-pre-dawn e-mail. “Peak rainfall totals are projected to be just over 6 inches (approx. 150 mm), mostly in a narrow region just south of the DC Metro [area].”
In contrast, the region’s heaviest single-day, 2-year rainfall event is a bit more than 50 mm. Bosma uses that comparison in generating an ERM around 2.86 (152 mm / 53 mm). Rainfall may exceed the projections, but that gives a rough idea of how the storm compares to others in residents’ recent memory.
According to the study, which was published in the Bulletin of the American Meteorological Society in May, the average value of an ERM in U.S. landfalling hurricanes and tropical storms is 2.0. ERMs can hindcast the severity of precipitation for such storms, like 2017’s Hurricane Harvey. Harvey deluged Texas with as much as 60 inches of rain and reached an ERM of 6.4—the highest calculated.
Those having lived in the D.C. area in the early 2000s might recall a tropical storm that Bosma says is comparable to Isaias: Isabel. After landfall in eastern North Carolina as a Cat. 2 hurricane the morning of September 18, 2003, it barreled north-northwest through the Mid-Atlantic delivering flooding rains and damaging winds that night.
“Isabel was also a fast mover at landfall, and was responsible for similar one-day rain totals of just over 6 inches, based on CPC-Unified gauge-based gridded data,” Bosma wrote.” The peak ERM for Isabel was 2.8. One thing to note from Isabel is that localized rainfall totals were higher in some spots, particularly in the mountains of Virginia, highlighting the threat of localized flash flooding that might also be present today with Isaias.” 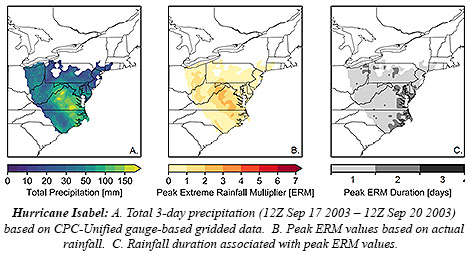 Indeed, flash flood warnings were issued all across the interior Mid-Atlantic this morning. This was despite drought conditions in parts of the area.
Bosma and colleagues Daniel Wright (UW-Madison), J. Marshall Shepherd (University of Georgia), et al., created the ERM metric to focus on the deadly hazard of extreme tropical cyclone rainfall. Getting word out about the threat using only the wind-based Saffir-Simpson Scale “was a problem brought to light with Hurricanes Harvey and Florence,” Shepherd says.
Wright also in an e-mail last night stated that for Isaias in and around Washington, D.C., it’s “a fairly large amount of rain, though certainly not unprecedented for the region.” 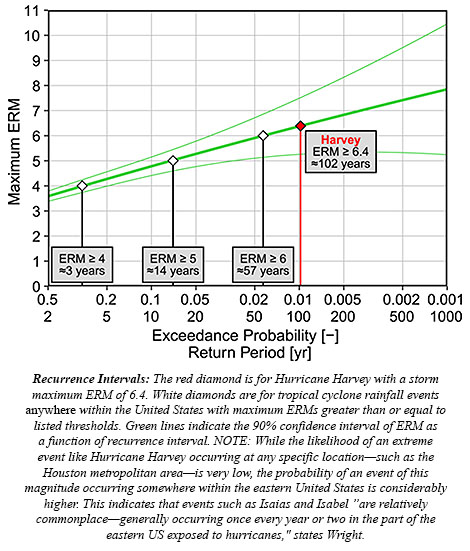