For a fifth consecutive year, NOAA is forecasting an above-average number of tropical cyclones (TCs) in the Atlantic, with 13-19 named storms expected in 2020. The number of TCs includes both tropical storms and hurricanes. This is in line with recent hurricane season forecasts by The Weather Channel, Penn State, Tropical Storm Risk, and others. 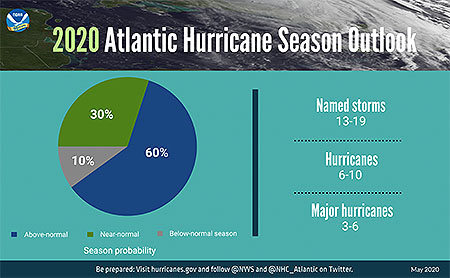 The recent spate of highly-active TC seasons, however, contrasts sharply with future trends in a majority of climate models, which simulate decreasing annual numbers of TCs as Earth’s climate continues to warm. That’s one of a number of findings in a recent paper by Tom Knutson (NOAA) and colleagues in the Bulletin of the American Meteorological Society.

In the paper, a team of tropical meteorology and hurricane experts led by Knutson assessed model projections of TCs in a world 2°C warmer than pre-industrial levels. The authors indicated mixed confidence in a downward TC frequency trend, even though 22 of 27 climate models the authors reviewed indicating the decrease. Some reputable models, though a minority, showed the frequency in named storms will instead increase in a warmer world, which lowered confidence in this particular finding.

An average hurricane season in the Atlantic, which includes storms forming in the Caribbean Sea and Gulf of Mexico, sees 12 named storms with 6 becoming hurricanes. Of those hurricanes, typically three strengthen their sustained winds above 110 mph, becoming major hurricanes.

NOAA’s forecast cited warmer-than-usual sea surface temperatures, light winds aloft, and the lack of an El Niño, which tends to shear apart hurricanes, as factors for this year’s potentially active season. “Similar conditions have been producing more active seasons since the current high-activity era began in 1995,” NOAA stated in a release Thursday.

Knutson and his colleagues explain that the reason or reasons for a future decrease in TC frequency is uncertain, even as a warmer world would mean a continuation of warming seas. One possibility, the team entertains, is a decrease in large-scale rising air, termed “upward mass flux,” in the future. Its mechanism, however, is unclear, they find. Another is a reduction in saturation of the middle atmosphere in the models. Both are unfavorable for TC genesis.

The authors state that projections of TC frequency in different TC basins are “less robust” than the global signal. Comparing basins, they did find that the southwest Pacific and southern Indian oceans had greater TC decreases than the Atlantic and the Eastern and Western Pacific oceans.

They conclude this portion of the study stating that “reconciling projection results with theories or mechanistic understanding of TC genesis may eventually lead to improved confidence in projections of TC frequency.”

Knutson’s team found greater certainty in other facets of future TCs in the same study. For example, they expressed medium-to-high confidence that hurricanes will become stronger and wetter by the end of the twenty-first century.