The path from good science to good societal decisions is the central paradigm not only of the scientist’s perspective on how to impact the world, but also to the public’s faith in science itself. It also turns out to be a path of personal growth as well.
There’s a whole genre of attempts to depict these connections between science and its usage. One noteworthy example of such diagrams was published by the Bulletin of the American Meteorological Society back in 2002. John Dutton (now of Prescient Weather, Ltd.; then dean at Penn State University), saw a need to update the flow of scientific information from numerical models to decision makers. He recognized the increased use of computerized decision models that were interpreting scientific forecast input; he also wrote eloquently about the feedback and blurring between economic sectors, users, and scientists. Here’s what he came up with:

While Dutton’s focus was on expanding economic opportunity, he wrote with a palpable sense of inexorably widening horizons from that kernel of numerical weather modeling into all corners of societal activity: “Wider distribution leads to enhanced creativity and advancing capability as a thousand flowers bloom,” Dutton wrote.
That same vision of the expansive horizons, all stemming from a mere act of meteorology, infused Susan Avery’s address to the AMS Student Conference in Austin this year. Only in this case, it is a parallel to Dutton’s economic view–a rippling from science to policy to society. In her talk, titled “Usable Science: Connecting Science to Action,” Avery, president emerita of Woods Hole Oceanographic Institute, depicted the pathway from science to society as a personal journey. Her ever-widening ellipses show an expansion of opportunities, knowledge, and horizons throughout a career as you move beyond the possibilities of a scientific education. 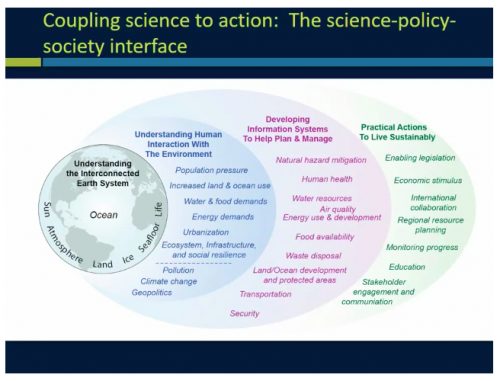 Often those pathways, those learning opportunities, those experiences come about by the sciences themselves, and the evolution of the science. Believe it or not, the demands right now for you and predictive information—it’s not just about the weather forecast anymore.
I know this is the American Meteorological Society and everybody thinks it’s all about weather, but this Society itself, which has been an inspirational part of my personal and my professional growth, it also isn’t just about the weather anymore and the daily weather forecast.
I’d like you to think broadly as you go through your life and your career. Some of these learning experiences you might have will allow you to evolve your thinking in terms of what is knowledge of the atmosphere and how does it apply to something else other than the daily forecast.
Part of this idea of coupling science to use is associated with understanding the interdependency of what you’re trying to do and what you’re trying to solve. I like this diagram because—it looks kind of complicated—but it’s really the only one I can think of in trying to understand what is this connection between science, policy, society, and use.
First of all, the atmosphere is only one part of our planetary system. A lot of the atmospheric motions there are because of ocean-atmosphere interaction. You have to understand there’s an ocean driver there as well. When you worry about how that plays out in terms of people, you have to worry about where we live, on the land….A lot of atmospheric science departments today are really Earth system science departments. The science is pushing us that way.
If you want to apply that science to solving problems, it’s pretty important to understand what those problems are and the interdependencies particularly between the planet system and humans. So that second ellipse talks about those interdependencies—particularly population pressure, societal desires, and what that means in terms of consumption patterns, water use, energy use, where you live. We are a human forcing function on that planetary systems.

And so to the third ellipse and on to the last as the knowledge pushes us. Dr. Avery explained, “These are just some of the pathways that you might see yourself taking in the future.”
You now can hear Avery’s whole talk online.