Despite the general good fortune that the storm stayed out at sea, there are plenty of grumblings about the cost of Hurricane Earl and more specifically the cost of preparing for it:

Last week’s storm was forecast to be the strongest to hit Long Island’s East End in nearly twenty years. And to handle possible outages, the Long Island Power Authority brought in 1,600 workers from out of state, at an estimated cost of $30 million. LIPA’s budget — already reeling from combating four major storms earlier this year — is now even further in the red.

However, because the storm was supposed to hit such a wide area, LIPA says if it had to do it all over again, it still would’ve brought in those extra workers.) 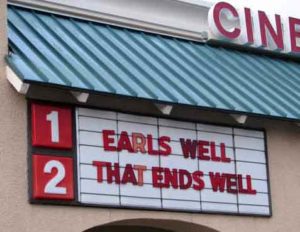 Airlines canceled dozens of flights into New England, and Amtrak suspended train service between New York and Boston….Massachusetts officials estimated that Cape Cod lost about 10 percent of its expected Labor Day weekend business, but were hopeful that last-minute vacationers would make up for it. Gov. Deval Patrick walked around Chatham on Saturday morning, proclaiming, “The sun is out and the Cape is open for business.”

So, as a palliative while people continue to grouse about paying the costs of meteorological uncertainties, read Mike Smith’s post about the savings this time when 450 miles of coastal warnings were issued compared to the much broader-brush (1,500 coastline miles warned) for Hurricane Floyd in 1999.

Instead of warning the entire East Coast as we had to during Floyd, the science of meteorology correctly identified that only the two areas (outer banks and far east Massachusetts) were at risk and warned accordingly. The forecast change in Earl’s direction of movement and rate of weakening were both remarkably good considering this forecast was two days out.

Taking NOAA’s calculations for evacuation costs per mile of coastline, and a reduction of 1,050 miles of warnings in similar situations, and do the math:

OK, now take those 1,050 miles and multiply them by a conservative figure of $700,000 in savings for each mile that correctly was not warned = $735 million dollars! ….And, when you figure in the value-added private sector hurricane forecasts issued by companies like WeatherData and its parent company AccuWeather, the savings grow further, perhaps approaching a billion dollars in total when the correct landfall forecast for Canada is factored in.

Clearly this depends on whether people actually evacuated based on the warnings, but the progress is clear, nonetheless, as are the positive benefits of recent improvements in track forecasts.