While many parts of the country have recently been experiencing conditions that residents might call “Arctic,” the Arctic region itself has been warming since at least the early 1990s, reaching warmth unprecedented in the last century. The consequences for global climate are potentially critical―particularly if fresh water from melting ice and increased atmospheric precipitation in the Arctic slow the overturning circulation of the North Atlantic. With Arctic sea ice melting dramatically in recent years, scientists  are trying to understand the influence of the warmer water that flows into the Arctic from the North Atlantic.
At the National Oceanography Centre (NOCS) in Southampton, United Kingdom, scientists using high-resolution computer models found that from 1989 to 2009, about 50% of the salty North Atlantic water entering the Arctic Ocean came through Fram Strait, a deep channel between Greenland and the Norwegian island of Spitsbergen that connects the Nordic Seas to the Arctic Ocean. The Barents Sea contributes about as much Atlantic water to the Arctic, but the Fram Strait water carried most of the heat that has been a primary cause of Arctic ice melting.
An example of the modeling in this study, published in the January 2010 issue of Journal of Marine Systems, can be seen in the image below, which shows a computer simulation of ocean temperatures at a depth of 100 meters and sea ice thickness in September 2006. The pathways of warm saline water toward the Arctic have previously been poorly understood, but here the 8-km resolution defines three distinct pathways for this water to move under the more pure Arctic water, thus pumping heat northward between 50 and 170 meters below the surface.
“Computers are now powerful enough to run multidecadal global simulations at high resolution,” said NOCS scientist Yevgeny Aksenov. “This helps to understand how the ocean is changing and to plan observational programs so as to make measurements at sea more efficient.”
Ocean-climate interactions are a primary focus of the ocean science research priorities recommended by the U.S. National Science and Technology Council’s Joint Subcommittee on Ocean Science and Technology (JSOST) in their 2007 report, “Charting the Course for Ocean Science in the United States for the Next Decade: An Ocean Research Priorities Plan and Implementation Strategy.” As our understanding continues to evolve regarding the ocean and its influence on the Earth system, the priorities outlined in this report have also evolved. A town hall meeting on “Refreshing Our Ocean Research Priorities” (Monday, 12:15–1:15 p.m., B212) at the upcoming AMS Annual Meeting will explore some of these developments and give participants a forum to discuss topics of interest with the chairs of JSOST. 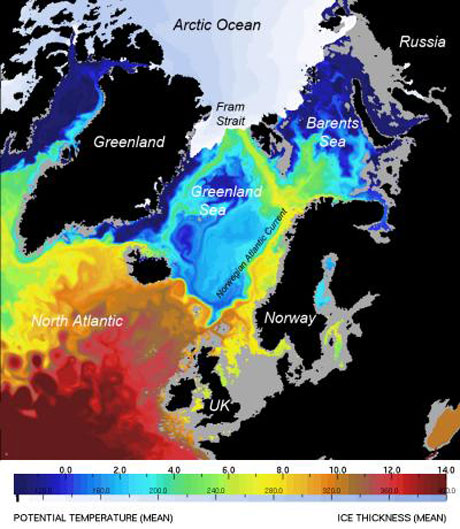