COVID-19 has upended air travel for now, but if the growth in global aviation resumes, one real drag on flying is going to be increasing energy needs due to global warming. New research published in the Bulletin of the American Meteorological Society by Diandong Ren (Curtin University, Perth) et al. shows that Earth’s warming climate is going to have an often overlooked—but costly—impact on the fuel consumption of airplanes. The reason: increased viscosity, or “stickiness,” of the air.

For starters, a warming atmosphere will expand and become less dense, reducing the lift produced by aircraft wings, which means planes must increase speed and burn more fuel to maintain carrying capacity. This disadvantage counteracts any fuel advantages of flying in thinner (less resistant) air. There are other small effects on engine efficiency. In all, there is some ambiguity about the direct effect of the warming atmosphere on fuel needs at cruising altitudes. But Ren et al. point to a much larger fuel impact due to increasing atmospheric viscosity.

In a warmer world, more water can evaporate into the air. The extra molecules of water increase the drag on aircraft and that in turn will cause planes to fight harder to cruise through the air, requiring additional fuel. The increasing drag turns out to be the dominant issue—and could become very expensive. 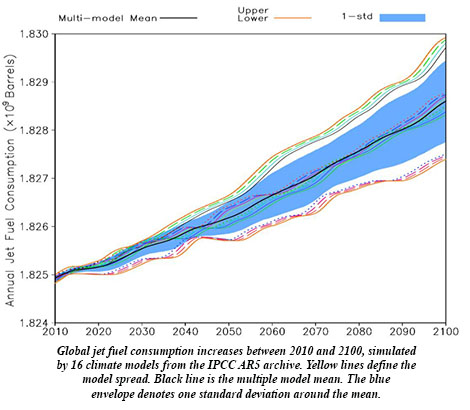 Ren et al. use an ensemble of 34 climate models to project that aviation fuel requirements by the end of the century could be an extra 160 million gallons per year due to viscosity, approaching an extra $1 billion per year in costs more than today in a scenario in which fossil fuel use is basically unabated.

The findings take account of regional and altitudinal variations in warming for different projections based on different amounts of emissions predicted. They also take into account the most trafficked flight paths, based on recent airline data. For example, some high altitude cooling at high latitudes would mitigate the effects of drag in near-polar routes, but few jets fly these paths. Flights at mid- to low-latitudes experience the biggest increases in drag—less than 2% per century, but enough to have  consequences in fuel usage. Overall, an air viscosity increase leads to about a 0.22% increase in fuel consumption by the year 2100 over 2010.

While these costs are still a small fraction of the total aviation fuel usage, they are yet another incentive for the industry to mitigate global warming through emissions reductions, as well as to pursue adaptations and efficiencies in aviation technology.

On his blog this week, Mike Smith, CCM (and an AMS Fellow) discusses the common air passenger’s frustration

with seat belt warning signs that stay on for hours even when the weather is clear and turbulence-free. But Smith’s post  is interesting reading also because it is a uniquely meteorologist‘s frustration with this form of over-warning. He argues that we know enough about clear-air turbulence (and thunderstorm avoidance) that it makes little sense to tie people down to their seats for so long.
As we know from experience, most recently the United Airlines flight on July 20th in which two dozen people were injured, the seat belt signs are indeed important. More than 90 percent of all injuries on turbulent flights happen when people don’t buckle up appropriately. But Smith observes,

I fear pilots are — too often — training their passengers not to observe the sign. Fly enough miles with the seat belt sign on but no turbulence and you’re tempted to get up, sign or no sign.

Overuse of the warning sign is well known in aviation circles. From the pilot’s point of view, there’s a lot more to this situation than just meteorology. Some pilots apparently forget the light is on (one critic here says, “I think pilots pay about as much attention to the seatbelt sign as the passengers do”) and in any case airline policies and pilot predilections vary. In the United States, in particular, airlines must deal with liability: passengers frequently sue them when injuries are caused by turbulence. (One wag dubs the seat-belt sign the “anti-litigation switch.”)
Can science overcome this situation? Clear air turbulence has been a topic of research since bomber pilots encountered the jet stream in World War II—the Navy Bureau of Aeronautics’ Project AROWA in the 1950s researched the problem of forecasting clear air turbulence (for example: this paper in the AMS archives). Research on radar techniques for detecting CAT started to take off in the 1970s, and much progress is being made even now (here’s a good example of recent developments in CAT forecasting); it remains an area of intense research and product development.
Ultimately, improved CAT warnings are at the mercy of the confidence that customers (in this case, the pilots) have. Even if pilots do know the latest science or know how to use the latest gadgets, low confidence in new tools can mean excessive warning, which means careless passengers, which in turn means frustrated meteorologists, and an ongoing challenge for the aviation weather community.

The Space Weather Symposium at the AMS Annual Meeting once again will discuss the radiation exposure that airplane passengers get from outer space. This year the presentations in this area of space weather cover future suborbital flights as well (Tuesday, 1:30 p.m., B315).
A typical flight exposes airline passengers to minimal levels of extraterrestrial radiation; such occasional exposures are not considered harmful. The radiation concern is usually reserved for high-flying pilots who spend a lot of time in the air, especially on long polar routes, or for flights during a solar storm.
But one source of gamma rays and typical x-rays might indeed be quite problematic, though very rare, for ordinary air travelers. The radiation is not from outer space, but instead from Earth.
A research group led by Joe Dwyer, professor of physics and space sciences at Florida Institute of Technology, shows that terrestrial gamma-ray flashes (TGFs) produced by thunderclouds could expose nearby airplanes to a radiation dose of 10 rem. That’s about 400 chest X-rays, three CAT scans, or 7,500 hours of normal flight time, what the researchers describe as