The Pacific Northwest still is one of the few shining spots on the snow map for this holiday, but if Seattle is waiting with bated breath (and outstretched tongue)  for a big, beautiful White Christmas, Cliff Mass throws a bucket of cold (flakes?) on hopes for deep cover. He explains how numerical prediction models can overstate snow possibilities in low elevations near mountains. But also: he explains the commonly misunderstood difference between accumulated snow (what fell from the sky) and snow depth (what remains to pile up).

If you are one of the lucky few with snow on Christmas Day (and one of the many who will celebrate a holiday unimpeded by snowy roads), we have to ask: what are you going to do with that snow, anyway?

If you’re not sure, ask some experts. Maybe ask your friends in the Northeast who so far this winter are bereft of drifts. Would they make snow angels? Sculpt snow people, with carrots, or with buttons of coal dug out of stockings?
When meteorologists catch snowflakes—and not on outstretched tongues!—they measure. Science means quantifying snowfall.  Accuracy matters: the measurements are meaningful. For example, they figure in aircraft deicing, forecasts of spring melt, stream runoff, flooding prospects, and more. They are also tracked over many years in climate records.
Unfortunately, while measuring snow depth might be easy to imagine if you have a ruler, it’s not so simple, and measuring ongoing snowfall is not easy. Ultimately…like most things scientific: there’s more to learn and important refinements to make!

For years meteorologists have realized that not all observers and networks measure snowfall the same way. For instance, methods of shielding gauges from wind errors, or accounting for evaporation, vary. And the results vary. To clear this snow observing problem the World Meteorological Organization put together a team of scientists who compared and evaluated the various methods and devices used worldwide. Kochendorfer et al. followed up to see what progress can be made from this WMO report. They write:

Snowfall is one of the most difficult meteorological variables to measure using automated sensors. …. Despite recent advancements in sensor technology, measurement techniques, and communications, snow cover measurements, such as snow depth and snow water equivalent (SWE), are still primarily recorded manually, and require specialized equipment and well-trained personnel. …. Measurement of the liquid water equivalent of precipitation falling as snow, or other forms of solid precipitation, typically requires heated precipitation gauges to prevent full or partial blockage (capping) of the gauge inlet by snow and ice. In addition, precipitation gauges can significantly underestimate the true amount of solid precipitation, primarily due to wind effects. For these reasons, the improvement of snow cover and solid precipitation measurements is an important subject of climatological and hydrological research in cold regions.

All-season measurement methods that catch precipitation (such as tipping-buckets) can handle snow, as can weighing gauges. Methods that catch snowflakes ultimately require weighing the melted water of snow. For these common methods, Kochendorfer et al. note that evaporation and response delays can be a problem (because it is necessary to warm and melt the snow and weigh the catch). The wind shields protecting the gauges can also accrue or redirect snow, however.

One piece of advice from the article may seem perfectly attuned with a White Christmas. If you’ve got family coming over for dinner, and a weighing-gauge catchment device for snow, put the snow in the pan and of course, heat it, but also add a layer of oil. The idea is not to fry up a side dish. But to prevent evaporation (and freezing—in fact antifreeze is used in some snow measurement techniques). Yes, that’s basically a way to keep track of snow as its falling and not lose too much in the process.

The ways of “undercatchment” are multifarious: 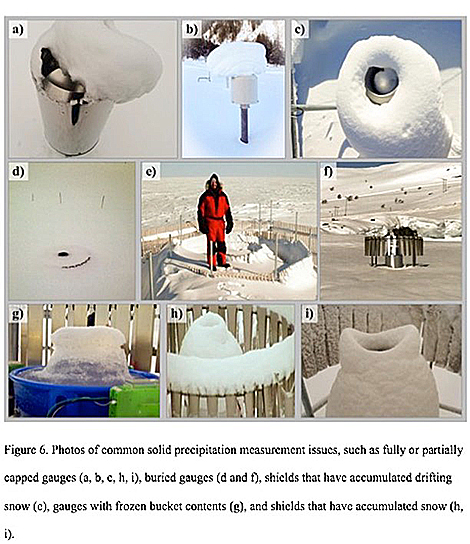 Meanwhile, Kochenderfer et al. note a proliferation of automated gauges and new non-catchment methods that involve using laser disdrometers and “present-weather” detectors to remotely determine what type of precipitation is falling.
Think of it as measuring free-ranging, versus, captive snow. Data processing methods allow calculations of snowfall rate. So far, according to the WMO comparisons, these devices solve some of the problems of “catchment” measurements, but they are still susceptible to over- and under-counting snowfall accumulation, due to wind direction and other factors. Results so far look better for observations on long periods like full seasons, rather than for a one-day holiday.  The new disdrometers can also be used in tandem with simple evaporative plates that use mass heat transfer to measure amounts.

Even if a White Christmas isn’t in the immediate future for many of us, the future of snow measurement may already have arrived anyway, if not for every observer. 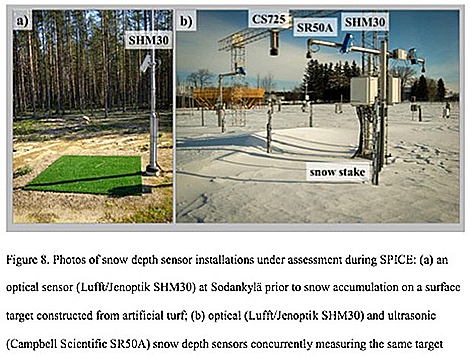