Tropical cyclones are usually associated with bad news, but a long-term study about these storms now posted online for publication in BAMS has some good news–about the forecasts, at least. The authors, a Japanese group lead by Munehiko Yamaguchi, studied operational global numerical model forecasts of tropical cyclones since 1991.
Their finding: the model forecasts of storm positions have improved in the last 25 years. In the Western North Pacific, for example, lead time is two-and-a-half days better. Across the globe, errors in 1 – 5 day forecasts dipped by 6 to 14.5 km, depending on the basin.
Here are the improvements for the globe as a whole. Each line is a different modeling center: 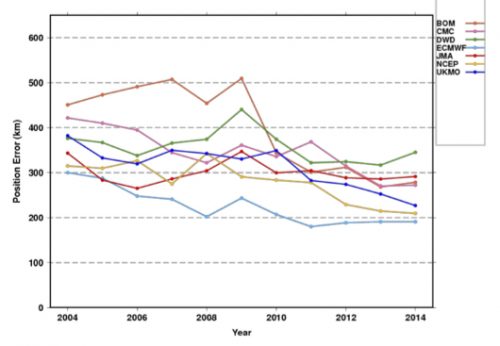 While position forecasts with a single model are getting better (not so much with intensity forecasts), it seems natural that the use of a consensus of the best models could improve results even more. But Yamaguchi et al. say that’s not true in every ocean basin. The result is not enhanced in the Southern Indian Ocean, for example. The authors explain:

This would be due to the fact that the difference of the position errors of the best three NWP centers is large rather than comparable with each other and thus limits the impact of a consensus approach.

The authors point towards ways to improve tropical cyclone track forecasts, because not all storms behave the same:

while the mean error is decreasing, there still exist many cases in which the errors are extremely large. In other words, there is still a potential to further reduce the annual average TC position errors by reducing the number of such large-error cases.

For example, take 5-day track forecasts for Hurricane Joaquin in 2015. Hard to find a useful consensus here (the black line is the eventual track): 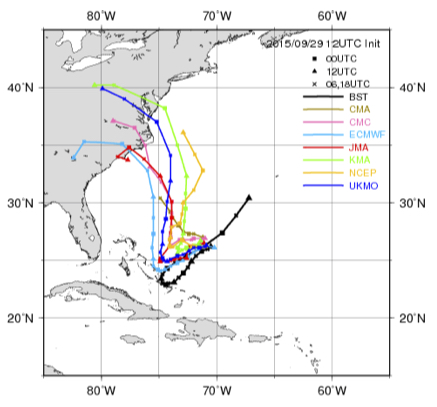 Yamaguchi et al. note that these are types of situations that warrant more study, and might yield the next leaps in improvement. They note that the range of forecast possibilities now mapped as a “cone of uncertainty” could be improved by adapting to specific situations:

For straight tracks, 90% of the cyclonic disturbances would lie within the cone, but only 39% of the recurving or looping tracks would be within the cone. Thus a situation-dependent track forecast confidence display would be clearly more appropriate.

Check out the article for more of Yamaguchi et al.’s global perspective on how tropical cyclone forecasts have improved, and could continue to improve.