When water-laden air lifts up the eastern slope of the Rockies, enormous thunderstorms and catastrophic flooding can develop. Americans may remember well the sudden, deadly inundation of Boulder, Colorado, in September 2013. For Canadians, however, the big flood that year was in Alberta.
Four years ago this week, 19-23 June 2013, a channel of moist air jetted westward up the Rockies and dumped a foot of rain on parts of Alberta, Canada. The rains eventually spread from thunderstorms along the slopes to a broader stratiform shield. Five people died and 100,000 fled their homes, many in Calgary. At more than $5 billion damage, it was the costliest natural disaster in Canadian history until last year’s Fort McMurray fire.
While we might call it a Canadian disaster, the flood had equally American origins. A new paper in early on-line release for the Journal of Hydrometeorology shows why.
The authors—Yangping Li of the University of Saskatchewan and a team of others from Canadian institutions—focused mostly on how well such mountain storms can be simulated in forecast modeling. But they also traced the origins of the rain water. Local snowmelt and evaporation played a “minor role,” they found. “Overall, the recycling of evaporated water from the U.S. Great Plains and Midwest was the primary source of moisture.”
Here is what the distribution of sources looked like. The colors show net moisture uptake from 6 hours to 7 days before the storm: 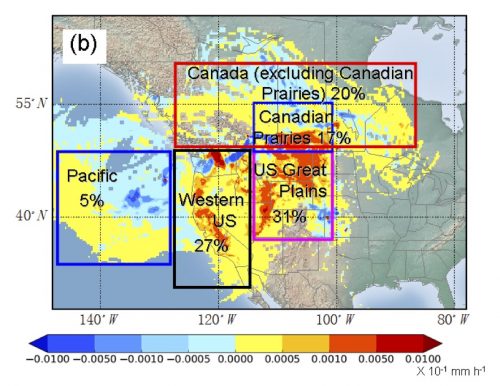 Some of the water came from as far east as the Great Lakes, and more than half from the United States. While storms along the eastern slopes of the Rockies often get Gulf of Mexico moisture, in this case, Gulf air had already dumped its moisture on the U.S. Plains. In other words, the soaked Plains merely recycled Gulf moisture back into the air to be carried into Canada.
American floods, Canadian floods, and any combination thereof—Li et al. remind us of the cross-border interdependence of weather, water, and climate … a relationship not just for this week but for the future:

For more perspectives on this noteworthy flood, take a look at another new paper in early online release–Milrad et al. in Monthly Weather Review–or at the companion papers to the Journal of Hydrometeorology paper: Kochtubajda et al. (2016) and Liu et al. (2016) in Hydrological Processes.