At 10:36 a.m. on 22 March 2014, near Oso, Washington, the earth began to move.  At first the lower section of slope rising from the North Fork Stillaguamish River slipped. Then the rise above that collapsed, ultimately sliding so fast that nothing could stand in its way. An eyewitness near the river saw water tossed aside and turn black. A 30 m high wall of turbulent earth roared across and along the valley. About 8 million cubic meters of dirt and rock buried the village of Steelhead Haven and killed 43 people. The slide ultimately dammed the river as it raced at 60 km/h along a 1 km wide, 1 km long swath. 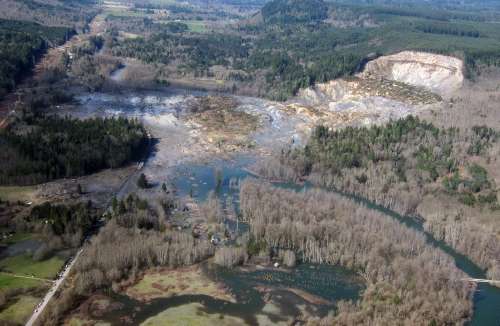 The Oso landslide (aftermath photo above, Mark Reid/USGS) was a scientific mystery. There was no obvious geological trigger, like an earthquake. And the slope itself, while prone to slides, was not precariously steep. Meteorologically, it was a rain-free day in a week of no precipitation. However, two new studies—one of them forthcoming soon in the Journal of Hydrometeorology—show why Steelhead Haven was in the wrong place at the wrong time, both geologically and meteorologically.
An overview paper this January in Earth and Planetary Science Letters showed how the Oso landslide underwent two stages of motion. The lower slope slipped slowly for about 50 seconds until the more radical collapse from above led to a high mobility liquid state called a “debris avalanche.” As the landslide spread across the river the debris picked up more moisture. The flow of dirt and rock spread the damage far beyond the initial slip of earth. The gushing mud and rock actually splashed against the opposite slope across the river and spread back upslope on top of itself.
Previous landslides in the Oso area had never attained that extremely mobile second stage. The slope of the 180 m high rise above the river is less than 20 degrees, and scientists have found highly mobile landslides usually start with greater than 20 degree slope—typically more than 30 degrees. What made this one different?
The paper’s authors, Iverson et al. say one reason was the porous geology of local sediments and silt. This porosity may have increased suddenly as the base of the slope started to slip. Then as ground slid the pores contract, raising water pressure and increasing liquefaction that greases the skids for faster movement and more contraction. Furthermore, as rock and dirt overran the river, the slide picked up another 50,000 cubic meters of water and scoured the river bed for more debris.
But if a critical sensitivity to initial geological conditions existed why did the land give way on a sunny day like 22 March 2014 instead of during an earlier, rainier part of the season?
The analysis by Brian Henn et al. in Journal of Hydrometeorology shows that the precipitation in the three weeks before the landslide was unexceptional (such periods are expected every two years or so) if compared to the soaking that the area can get during the rainy season. But the rain was exceptional (an 88-year expected return period) when compared to similar March periods of the past, and that is a bad time to get wet.
Since March is late for the rainy season, this meant additional water charged deep soils that were already wet. Heavy rains earlier in the year encountered soils that contained less moisture. The late rains came on top of an already wet season as well as four wet years before that. 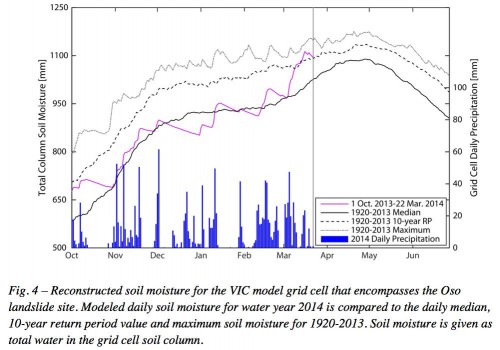 As a result, six days before the landslide soil moisture for the water year peaked and was wetter than would be expected every 40 years at that date. The soil moisture had surged beyond median levels in just a few weeks. [See figure above from Henn et al. 2015]
In other words, Oso was primed for a landslide, even on a dry day, partly because some of the rain had fallen late in the season—poor meteorological timing for the village of Steelhead Haven.