As the world’s population grows, so does water usage. As a result, the rate we pump water out of the ground to satisfy our thirst and, more frequently, the thirst of the plants we grow, has been exceeding the rate that precipitation can replenish that water. From the news page of the International Groundwater Resources Assessment Centre about a study in Geophysical Research Letters:

The results show that the areas of greatest groundwater depletion are in India, Pakistan, the United States and China. Therefore, these are areas where food production and water use are unsustainable and eventually serious problems are expected. The hydrologists estimate that from 1960 to 2000 global groundwater abstraction has increased from 312 to 734 km3 per year and groundwater depletion from 126 to 283 km3 per year.


Not only does the depletion threaten food supplies in the long run, but it also adds to global level rise. The GRL article quantified this effect, showing that a quarter of the sea level rise since 2000 is due to aquifer depletion. Water that would have stayed underground 50 years ago is now used by people and their plants, then evaporated; eventually most of it finds its way back to the oceans.
As Roger Pielke points out in a recent post, there is much to be learned about the effect of this water on climate. Not all water under the surface of  the Earth is a renewable resource. While some aquifers indeed are readily replenished by recent precipitation, others have been (or were) locked away from ground sources for many years, due to geology. These isolated reserves, called “fossil water,” were formed long before humanity and have yet to be adequately inventoried. Some of them, like the Ogallala aquifer, have been tapped for agriculture. Thus fossil water is being returned to the water cycle (hence, climate) after a long absence.
All of this fuss over emptying ground water is a good introduction to the “image of the day” from NASA’s Earth Observatory. Not surprisingly, heavy liquid shifting to and from land has a significant local effect on the gravitational pull of the planet. (Fluctuations of the water table are also hypothesized by some geologists to trigger mid-continental plate earthquakes, but that’s an obscure intersection of geology and meteorology, reviewed in this month’s Bulletin of the Seismological Society of America, to explore in your spare time.) The gravitational effect of water is the basis of water distribution observations from the GRACE (Gravity Recovery and Climate Experiment) mission:

the satellites measured how Earth’s gravity field changed as water piled up or was depleted from different regions at different times of year.

Below is GRACE data from 2009-10 mapped by NASA’s Robert Simmons, showing how the water year giveth (blue) and taketh away (red). (There will be more on watching water resources carefully from space in presentations at the AMS Annual Meeting, including NASA’s David Toll on the NASA Water Resources Program on Tuesday 25 January.) 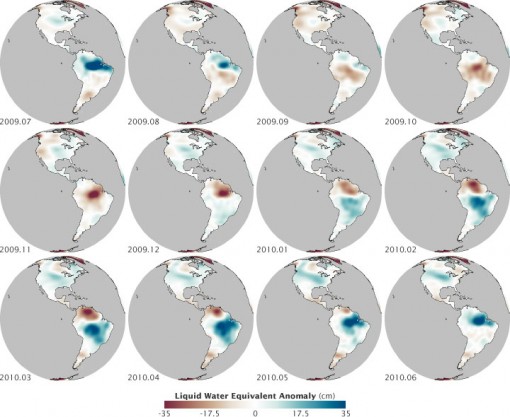