by Peggy Lemone, AMS President
A little over a year ago, when I was asked to choose a theme for the 2011 AMS Annual Meeting, I was drawn immediately to something to do with communication.  Within my family, and among acquaintances, communication about climate change, and even in parts of the AMS, had sometimes turned from a conversation to an argument.  But it wasn’t only that.  It was becoming more and more difficult to find out real news:  the media were increasingly flooded with lots of opinions, and one had to burrow down to find the facts.  Ironically, coverage of the day-to-day weather seemed better than ever.
Or was it?  Coverage of the French airplane crash over the Atlantic fumbled at first; no one seemed 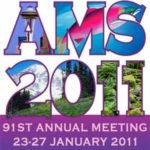 to have their facts straight.   And Katrina reminded us of the importance of communicating with diverse groups of people.  With numbers of journal pages increasing geometrically, and the field becoming broader, how well do we even communicate with each other as scientists? Some have asked if peer review even works.  Finally, and perhaps most important, how well are we getting our messages to the public?  Are we really communicating?
To address this broad theme is a real challenge, but we have settled on a few major events at the Annual Meeting in Seattle.  On Monday, we will hear about issues encountered by the media in communicating about weather and climate.  Bob Ryan, a long-time weather broadcaster, will moderate the panel, which will consist of Tom Skilling of WGN/TV and the Chicago Tribune, Claire Martin, the chief meteorologist of the Canadian Broadcasting Corporation and Chairman of the International Association of Broadcast Meteorologists, and Doyle Rice, weather editor of USA Today, and a fourth panelist who has not yet been confirmed.  Some questions to be discussed, though not an exhaustive list, include: how are stories chosen? Where does information come from?  What is the impact of blogs and other modern methods of communication on what people learn about weather and climate? And finally – how can the AMS community help out?
On Tuesday, we use a “teachable moment” to illustrate our effect on the environment.  Many of us have learned through experience that putting hundreds of people into a room with a poor air-conditioning system can heat up a room to uncomfortable levels.  With a good air-conditioning system, we stay a little cooler, but more energy is required to cool the room.  A group of students and vendors will be circulating through the conference the first few days to measure our impact on the air inside the Convention Center.  The students will report back at lunch on Tuesday, and David Sailor, Director, Green Building Research Laboratory (GBRL) of Portland State University and Chair, AMS Board on the Urban Environment, will put this in context, showing how we are part of the energy budget of a city, influencing not only the climate in the convention center, but the city’s climate as well.  This event is being coordinated by David Chapman, a high-school teacher form Okemos, Michigan, and Chair of the AMS Board on Outreach and Pre-College Education, and Daniel Wolfe, of NOAA/Boulder.
On Thursday, Ralph Cicerone, head of the National Academy of Sciences, will provide us a take-home message on what the scientific community in general and AMS in particular can do to increase its credibility with the public.  He has been thinking deeply how we can improve the practice of science and the behavior of individual scientists.  As much as listening, communication is based on some level of trust.  And, just as the Tuesday event should provide a teachable moment about how we influence our environment, the climategate emails were a teachable moment about human frailty being a part of the practice of science.  The current political climate has been reinforced by climategate and a few errors in the IPCC report in damaging the trust the public feels not only in climate science, but science in general.  Viewing this in a positive manner, it gives us incentive to re-double our efforts in promoting ethical professional conduct and improving the way we do business and communicate our findings.
Even when the dialog between the sciences and the public become difficult, communications through the art can break through the barriers felt on either side.  The arts can communicate the joy of witnessing a beautiful cloud formation or the concern we feel about the impacts of weather and climate.  Thus Lele Barnett is curating an art exhibit featuring over thirty artists from the Seattle area, focusing on the conference theme of communicating weather and climate. Some of the artists will collaborate with a scientist to explore themes ranging from the influence of the landscape by weather to scale as visualized in clouds to processes taking place at the interface between parts of the earth system to the impacts of climate changes in the polar regions. At each step, we have benefitted from the considerable help of Marda Kirn, head of EcoArts Connections in Boulder, Colorado, who has organized a variety of arts/science events around the country.
Those are some big events in the 2011 AMS Annual Meeting at this stage in their evolution.  We expect refinements, and there will be additional items to report on as the joint themed sessions and other parts of the meeting come together.  We invite you to comment, share your thoughts about communication, or suggest questions you would like the Monday panel to address.    We will report from time to time as the program continues to evolve.  Hope to see you in Seattle!
Editor’s Update, October: Thanks to the combined efforts of EcoArts Connections, Curator Lele Barnett, and AMS Conference Chair Peggy LeMone and Committee Member Steve Ackerman, many of the artists in the show have been paired with scientists to collaborate to create new works for Forecast.
Scientists come from universities and research centers in seven states in the US and Australia.  In addition to Washington, the states are: Colorado, Illinois, Montana, New York, and Wisconsin.
The scientists’ areas of study include: Arctic sea ice; atmospheric boundary layer; atmospheric chemistry; climate dynamics and change; cloud physics; eco-meteorology; hydrology; mesoscale analysis, convection, forecasting, and meteorology; oceanography; optical sciences; paleoclimate; precipitation physics; radar; regional climate; weather; and wind energy.