Mountain climber Dmitry Golovchenko captured tremendous video of the February 27 collapse of a “rime mushroom” atop Patagonia’s Cerro Torre. These are bulbs of massively accumulated rime—built up in the freezing of moisture in winds pounding at the peak over time. The mushrooms increase the difficulty of this infamous climb of more than 3,000 meters, but never more so than when their precariousness increases in summer—just when conditions might otherwise seem calm enough for climbing. Here is the video via an Instagram from patagoniavertical, the site of Rolando Garibotti, who co-authored a BAMS article on these infamous mushroom features:

A post shared by Patagonia Vertical – guidebook (@patagoniavertical) on Mar 3, 2020 at 6:21am PST

In their BAMS article, David Whiteman and Garibotti introduced rime mushrooms, well known to alpinists, but not previously to many meteorologists:

Rime mushrooms, commonly called ice mushrooms, build up on the upwind side of mountain summits and ridges and on windward rock faces. These large, persistent, rounded or bulbous accretions of hard rime range from pronounced mounds to towering projections with overhanging sides….[They] form when clouds and strong winds engulf the terrain. Supercooled cloud droplets are blown onto subfreezing surfaces and freeze rapidly, making an opaque “hard” rime with air trapped between granular deposits. The mushrooms are most frequent and best developed on isolated summits and exposed ridges in stormy coastal areas.

They showed the distribution of these mountain features around the world. 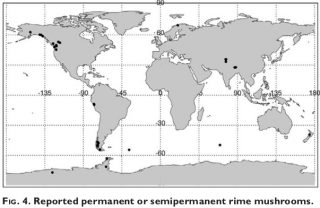 Thanks to Dr. Whiteman’s Univ. of Utah colleague Jim Steenburgh for bringing the video to our attention via social media. Jim’s own newly published BAMS article features the often well-rimed sea-effect snows of Japan and their similarities to lake-effect snows in the United States. The article explains how the heavy snowy accumulations of crunchy graupel (loose, rimed, large icy particles) in lowlands of the Japanese coast can be quite avalanche prone, too.

Mountains are already hard to miss, often hard to avoid, but in meteorology their prominence is only growing right now, according to John Horel and David Whiteman, chairs of last week’s AMS Conference on Mountain Meteorolog. Whiteman pointed in particular to new opportunities for modelers and observationalists to work together, bringing in new people to the field:

We’ve found over time that the models have improved at a faster rate than the observational equipment has improved, so what we tend to find is that there are people who are able to make their models work on smaller length scales but they find that they don’t have the observations to really evaluate how well the models are working. That’s been good for our community because we’ve also now been able to have a number of programs that combine these high performance models with an observational program….For the first time we can start to look at the very small features.

For more of Whiteman and Horel’s discussion with The Front Page, check out these video interviews (with apologies to John for the brilliant Sierra light in Squaw Valley!) from the AMS YouTube Channel, Ametsoc:


And for a more “down in the trenches” view of mountain meteorology (come to think of it, a rather nice view from the resort patio, between sessions), here’s another interview, with Thomas Chubb, Neil Lareau, and Temple Lee, recently uploaded to Ametsoc on YouTube:

This Monday at the AMS Conference on Mountain Meteorology, Rieke Heinze of the Institut für Meteorologie und Klimatologie at the Leibniz Universität Hannover presented this very cool looking simulation of von Kármán vortex streets, which sometimes show up in satellite images of clouds in the lee of isolated mountain islands. The nifty thing about Heinze’s simulation project is that it shows the vortices retaining a warm core from bottom to top in the flow (cross section not shown here).
On her project web site (where you can download the video), Heinze writes:

In the animations the island consists of a single Gaussian shaped mountain with a height of about 1.3 km and a base diameter of about 12km. Particles are released in one layer and act as passive tracers. Their vertical motion is disabled. The colour of the particles reflects the difference between the temperature at the respective particle position and the mean temperature, horizontally averaged over the total domain. Blue/red colours represent a relatively low/high temperature. The animation shows that the cores of the eddies are warmer than the environment. The length of the animation corresponds to about 14h real time.