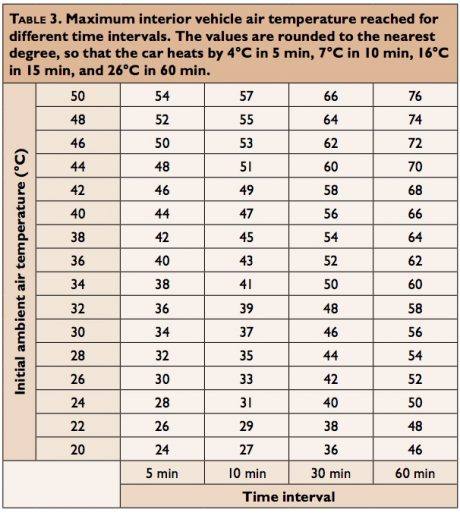 The September Bulletin of the American Meteorological Society features an article with a new table showing how fast the inside of a parked car can heat up if left with the windows closed. The data comes none too soon.
A small Kansas-based nonprofit, Kids and Cars, says that already this year, 48 children have died of hyperthermia in cars in the United States. This is a new record in the 13 years statistics have been available. An average of 37 children in the United States die each year from hyperthermia in cars.
It’s tempting to blame the spike in deaths (there were 33 last year) to the record heat in various parts of the country, but Jan Null, a CCM with Golden Gate Weather Services, cautions that hyperthermia in vehicles is a danger with or without record heat waves:

I think from the small 13-year sample that we have that probably from a statistical basis, this is within the range of what you would expect. It’s impossible, I think, to associate it with the weather totally. Is weather a factor? It’s always a factor.

According to the BAMS article, the interior air temperature of the vehicle can rise about 4°C in 5 minutes, about 7°C in 10 minutes, and 16°C in 30 minutes, and 26°C in an hour. Thus after an hour in direct sunlight, the air temperature in the vehicle can reach 57°C (135°F). Authors Andrew Grundstein, John Dowd, and Vernon Meentemeyer hope their research helps educate people about the dangers of hyperthermia to children who sometimes are inadvertently left unattended in cars.
Janette Fennell, founder and president of Kids and Cars, notes that these tragedies are due to ordinary memory error, not bad parenting, and hopes car makers will install warning systems that will alert parents who might have left their kids in cars, just as technology has made it possible already to warn of keys left in the ignition, open trunks, and low batteries. She says people can help themselves by routinely placing their briefcases, cell phones, or other needed items the back seat, near their children, so that they’ll have to look back before leaving the car.

Tropical Storm Lisa became the 12th named storm in the Atlantic Basin this week in what has suddenly become the active 2010 hurricane season that forecasters months ago had predicted. Nine of those twelve storms formed since August 21, with five of them becoming hurricanes. Before that, only one of the first three named storms (Alex) even reached hurricane strength. By contrast, 2005 (9 out of 28) and 2008 (6 out of 16)  both had numerous storms form before August 20. Why the delay this year? According to a story in Newscientist.com, a mass of hot, dry air over the oceans stunted the formation of tropical storms. Scientists traced this dry air to a massive ridge of high pressure that sat for months over Europe and Asia, causing an intense heatwave in Russia and severe monsoon rains in Pakistan this summer that killed thousands of people. But just as mid-August arrived, when the typical height of Atlantic hurricane activity is imminent, things changed. As the Weather Underground’s Jeff Masters wrote in his blog on August 17:

Vertical instability, which was unusually low since late July, has now returned to near normal levels over the tropical Atlantic, though it remains quite low over the rest of the North Atlantic. Instability is measured as the difference in temperature between the surface and the top of the troposphere (the highest altitude that thunderstorm tops can penetrate to). If the surface is very warm and the top of the troposphere is cold, an unstable atmosphere results, which helps to enhance thunderstorm updrafts and promotes hurricane development. Since SSTs in the Atlantic were at record highs and upper tropospheric temperatures were several degrees cooler than average in July, enhancing instability, something else must have been going on to reduce instability. Dry air can act to reduce instability, and it appears that an unusually dry atmosphere, due to large-scale sinking over the Atlantic, was responsible for the lack of instability.

Not until the heat wave broke near the end of August did the tropical storms really begin to form in earnest, with four storms (Danielle, Earl, Fiona, and Gaston) arising just between August 21 and September 1. And spurred by those record-high SSTs mentioned by Masters, the 2010 season has not only produced 12 named storms and 6 hurricanes, but 5 major hurricanes–four of them Category 4–making that slow start seem like a distant memory. To put this season in historical perspective, there have been yearly averages of 14 named storms, 8 hurricanes, and 4 major hurricanes since the current active Atlantic hurricane period began in 1995. This season is just one major hurricane away from moving into a 7-way tie for 3rd-most major hurricanes in a season, topped only by the 7 major hurricanes in 1961 and 2005 and 8 in 1950 (lists of most active seasons in various categories can be found here).