Planetary, synoptic, meso-alpha, meso-beta, local, and more—there are atmospheric scales aplenty discussed at AMS meetings. Enter microtopography, a once-rare word increasingly appearing in the mix in research (for example, here and here).
The word is also coming up as researchers are getting new tools to examine the interaction of tornadoes with their immediate surroundings. Microtopography looks like a potential factor in tornadic damage and in the tornadoes themselves, according to an AMS Annual Meeting presentation by Melissa Wagner (Arizona State Univ.) and Robert Doe (Univ. of Liverpool), who are working on this research with Aaron Johnson (National Weather Service) and Randy Cerveny (Arizona State Univ). Their findings relate tornado damage imagery to small changes in local topography thanks to the use of unmanned aerial systems (UASs).
Microtopographic interactions of tornadic winds were captured in their UAS imagery. Here’s the 5-meter resolution RapidEye satellite imaging of a 30 April 2017 Canton, Texas, tornado path (panel a) versus higher-resolution UAS imaging: 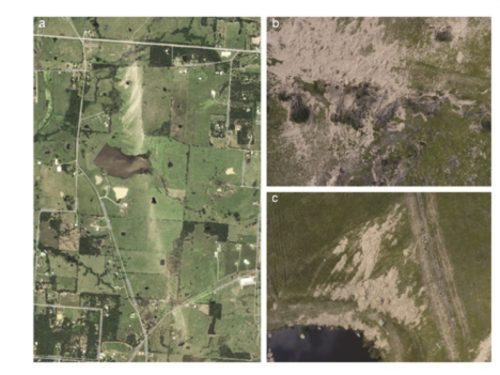 The UAS surveys show that tornadic winds interact with sunken gullies, which appear as unscarred, green breaks (circled in red) in the track of browned damaged vegetation: 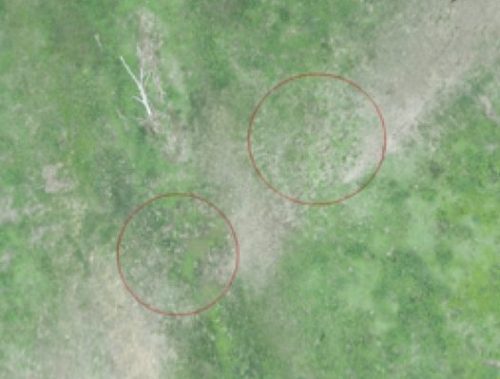 Erosion and scour are limited within the depressed surfaces of the gullies compared to either side. In another section of the track, track width increases with an elevation gain of approximately 74 feet, as shown in a digital elevation model and 2.5 cm resolution UAS imagery: 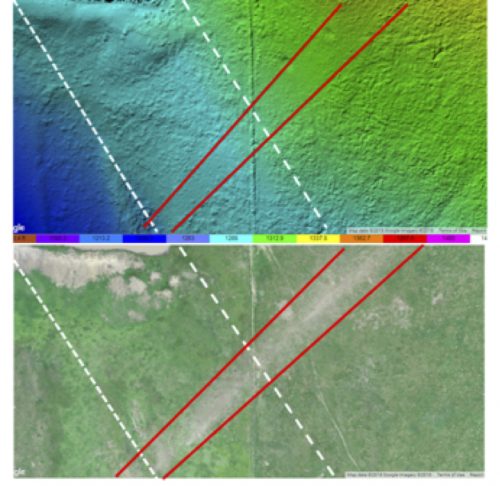 The advent of unmanned aerial vehicles (UAVs) has opened new windows on tornado damage tracks. Decades ago, damage surveys took a big leap forward with airplane-based photography that provided a perspective difficult to achieve on the ground. Satellites also can provide a rapid overview but in relatively low resolution. UASs fly at 400 feet—and are still limited to line-of-sight control and the logistics of coordinating with local emergency and relief efforts, regulatory and legal limitations, not to mention still-improving battery technology.
However, UASs provide a stable, reliable aerial platform that benefits from high-resolution imaging and can discern features on the order of centimeters across. Wagner and colleagues were using three vehicles with a combined multispectral imaging capability that is especially useful in detecting changes in the health of vegetation. As a result their methods are being tested primarily in rural, often inaccessible areas of damage.
UAS technologies thus can capture evidence of multi-vortex tornadoes in undeveloped or otherwise remote, vegetated land. The image below shows a swath with enhanced surface scour over two hills (marked X). The arrow on the right identifies speckled white surface erosion, part of the main tornado wedge. Such imagery explains why, among other research purposes, Wagner and Doe are developing the use of UASs in defining tracks and refining intensity-scale estimates. 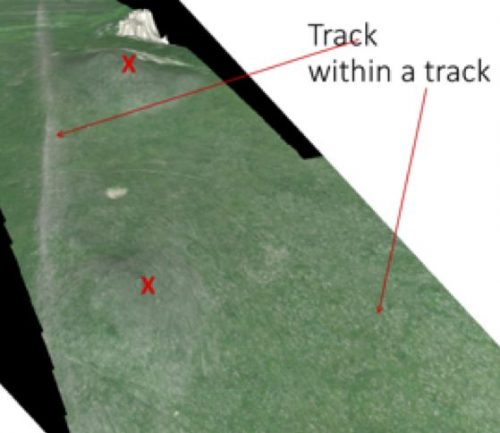