The still-developing field of attribution science examines specific weather events and short-term atmospheric patterns in a broader, longer-term climate context. In such research, communication is key; it’s vital to understand exactly what questions are being asked. A case in point is an article in the July issue of BAMS. “Explaining Extreme Events of 2011 from a Climate Perspective” gives long-term context to some of the significant weather events of 2011 featured in the new State of the Climate, which is also part of the July BAMS.
The authors write:

One important aspect we hope to help promote …is a focus on the questions being asked in attribution studies. Often there is a perception that some scientists have concluded that a particular weather or climate event was due to climate change whereas other scientists disagree. This can, at times, be due to confusion over exactly what is being attributed. For example, whereas Dole et al. (2011) reported that the 2010 Russian heatwave was largely natural in origin, Rahmstorf and Coumou (2011) concluded it was largely anthropogenic. In fact, the different conclusions largely reflect the different questions being asked, the focus on the magnitude of the heatwave by Dole et al. (2011) and on its probability by Rahmstorf and Coumou (2011), as has been demonstrated by Otto et al. (2012). This can be particularly confusing when communicated to the public.

So the new attribution paper in BAMS strives to answer a very specific questions–a series of them, as it turns out, since the paper is actually a collection of a number of studies by different teams, representing several of the cutting-edge approaches to researching attribution in rapid response to the extreme weather. Most of the authors, but not all, seek to answer questions about how global climate change changes odds that extreme events might occur.
Last week, NOAA held a briefing to discuss both the State of the Climate and the new BAMS article. Two coauthors of the article, Tom Peterson of NOAA’s National Climatic Data Center and Peter Stott of the Met Office Hadley Centre, discussed the answers they found. They noted that in some cases, such as the rainfall that caused flooding in Thailand, there was no connection between human activities and the extreme weather. But other events exhibited a clear human influence that increased the possibility of that event occurring. One example is the prolonged heat wave in Mexico and the southwestern United States, which was the region’s hottest and driest growing season on record by a significant margin. The steamy temperatures were connected to the La Niña that was prominent last year, and the study found that such a heat wave is 20 times more likely in La Niña years today than it was in 1960. As the coauthors noted in the briefing, the answer might be completely different in years without a La Niña , pointing out the importance of context–and understanding the questions being asked–in this study.
The State of the Climate itself documents the weather extremes of the recent past and give them context in the historical record. The 282-page peer-reviewed report, compiled by 378 scientists from 48 countries around the world, also provides a detailed update on global climate indicators and other data collected by environmental monitoring stations and instruments on land and ice, at sea, and in the sky. It used 43 climate indicators to track and identify changes and overall trends to the global climate system. These indicators include greenhouse gas concentrations, temperature of the lower and upper atmosphere, cloud cover, sea surface temperature, sea level rise, ocean salinity, sea ice extent, and snow cover. Each indicator includes thousands of measurements from multiple independent datasets.
Among the highlights of this year’s SOC:

The report also provides details on a number of extreme events experienced all over the globe, including the worst flooding in Thailand in almost 70 years, drought and deadly tornado outbreaks in the United States, devastating flooding in Brazil and the worst summer heat wave in central and southern Europe since 2003.

by William Hooke, AMS Policy Program Director
a portion of a series of essays from the AMS Project, Living on the Real World
In a short period of time (say, one or two hundred years), the human race has greatly grown in total numbers; has radically increased its per capita use of resources of every type; and has accelerated the rate of social change and scientific and technological advance.
In a short period of time? In science, a statement like that invites, maybe even demands a comparative. Short compared with what? Now you and I might look at this and say, “Well, a couple of hundred years is short compared with the age of the Earth itself, or with the ten thousand years of human civilization.” But here’s an additional list: Human success has occurred in a time short compared with 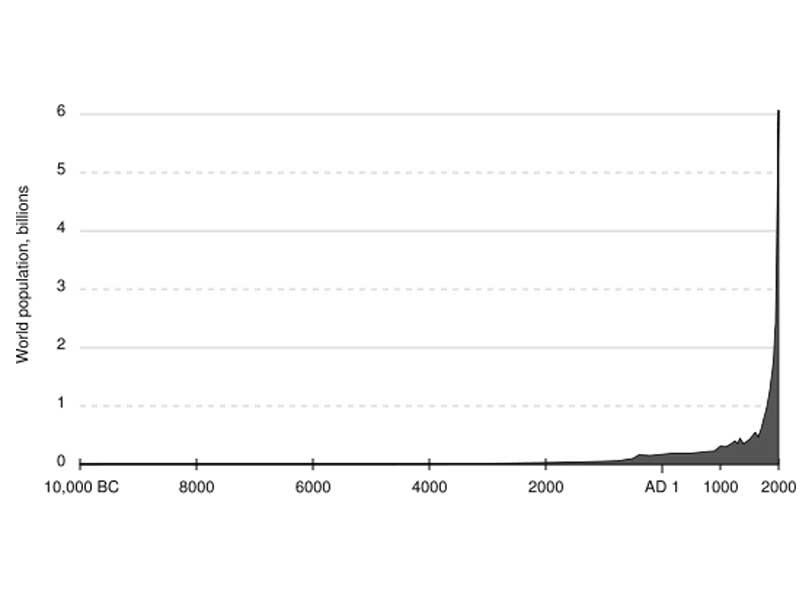 Each of these realities enables us to make a prediction about a different aspect of our future. Let’s look at the first: time scales of (“major”) climate variability
In the climate-change debate, much has been made of this, by both sides. The Earth’s climate has at times over the past few billion years been at times much colder, and at other times much hotter, than it is today. But during the last two hundred years, the time of this extraordinary human success, climate has been fairly stable.
If climate hadn’t been so stable during this period, then we might not even have the word “climate” in our vocabulary. We wouldn’t think the concept was useful! And arguably, we might have been better off! Think a little bit about this. Suppose you’re in a job where you directly see the impact of weather on your labors. Such jobs are in the minority these days, but they matter – a lot. Take farming. To oversimplify: you want to base your decisions throughout the year on the weather – what to plant, when to plant, when to water, when to apply pesticides and fertilizers, when to harvest. But you have to make many of these decisions based on a time horizon much greater than any useful weather forecast.
Then it occurs to you. Although the weather is variable year to year, these variations occur around a set of average conditions: the average last frost of the spring, the average spring rain, the average summer temperature and sunlight, the average first frost of the fall, etc. So you go with that, and it helps. Then, as you start looking into it more closely, you realize that the average you calculate depends upon how many years you include in the calculation: do it for the past ten years, and you get one set of answers. Do it for the past twenty and you get another. Do it for ten years, but for a different ten years, and you get another answer still. Your head starts to spin…
Meanwhile, over this same period of 200 years, while the human race has been on a roll, scientists have made some remarkable discoveries. They started looking hard at glaciers and the landscapes around them and discovered that ice, as much as a mile thick once covered much of the Earth, as recently as 10,000-20,000 years ago. Whoa! And they discovered looking back that at times the entire Earth must have felt tropical – that it was hot and steamy pretty much everywhere. Who knew? So the reality is that the Earth and its atmosphere and its weather are resolutely variable, on all time and space scales. From the standpoint of coping with climate variability and change of whatever cause, we might be better off simply asking questions like: how and in what ways are temperature and rainfall patterns, etc., likely to change over the next few hours? The next few days? The next few centuries? We’d be making no artificial distinctions between weather and climate (certainly nature doesn’t draw any such line of demarcation). Scientists are working hard on all this! The stakes of getting the right answers for the right reasons couldn’t be higher.
In any event, for the past two hundred years, the climate has been remarkably stable. This narrow range of climate variability hasn’t challenged us so greatly. Humanity has been able to take the easy way out. We have tuned our decisions and actions in weather-sensitive sectors like agriculture, water resource management, energy-demand, transportation etc., to a rather narrow range of climatic variables. And we’ve been lucky! It’s worked so far.
But we know from the science that climate is constantly changing, in part just because of the nature of the atmosphere and oceans, but in part because we’re tinkering. We’re taking all that carbon that plant life took out of that tropical atmosphere from millions of years ago and deposited into sediments – and we’re burning it and putting it back into the atmosphere. It’s looking like our winning streak is about to play out.
This leads to a prediction: The future will be characterized by adverse climate shifts. We don’t know exactly how much, and we don’t know when. But we do know this. We won’t like them! We’ll view them as unfavorable. Why? How do we know they won’t be to our liking? Because we have tuned our climate sensitive activities – our human settlement and water use, our agriculture, our energy production and use, and many other aspects of our daily lives – to a narrow range of climate conditions.
Note that this disaffection will be true whichever way the climate changes. When and where it gets wetter, we’re going to wish it were drier (I planted wheat instead of corn. I wish I’d planted corn!). Where it gets hotter, we’re going to wish it were cooler (ski season in Colorado is shorter than it used to be; I invested in my resort hotel at just the wrong time). Where it gets cooler, we’re going to wish it were warmer (Brr! My condominium heat pump here in Georgia isn’t up to this cold snap). When things dry up, we’ll long for the moisture (our hydroelectric power in the Pacific northwest is no longer meeting as much of our energy needs).