Nothing quite like watching lift-off…here’s the video sequence from Arianespace showing the flight of the rocket carrying South Korea’s GEMS satellite instrument into space earlier this week.

GEMS–the Geostationary Environment Monitoring Spectrometer–is a centerpiece of the Asian contribution to a triad of geostationary satellite missions watching air quality in some of the most pollution-prone urban centers of the world. The other similar missions to be launched are Sentinel-4 over Europe and TEMPO over North America. 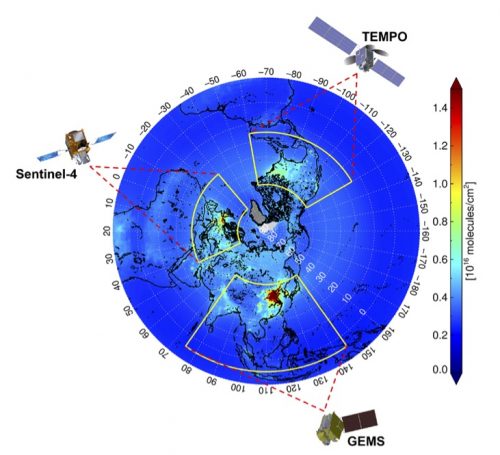 The image above superimposes the field of view for each of the satellites over an image of nitrogen dioxide concentrations averaged over the 10 years 2005-2014 from the Ozone Mapping Instrument aboard NASA’s Aura satellite. Aura is part of the “afternoon-train” or A-train of international satellites focused on anthropogenic aerosols. But these satellites pass over any given spot on Earth the same time each day.

With GEMS, such information is now going to be 24/7 for Asia. As a geostationary eye on air quality, the new South Korean satellite watches meteorology and atmospheric chemistry continuously. In addition to GEMS, which uses spectrometers to track ozone, nitrogen dioxide, sulfur dioxide, aerosols, ultraviolet index, and other health-related factors in the atmosphere, the satellite includes meteorological and ocean color sensors. This gives a synergy to Earth observing at faster sampling rates and higher resolution over the region, advancing investigations of air pollution for a large portion of the world’s population.

an improved likelihood of cloud-free observations …with continuous observations of a particular location during at least part of the day. This “stare” capability …makes it very effective for the retrieval of the lowermost troposphere information for capturing the diurnal cycle in pollutants and emissions, and the import/export of pollutants or proxies for pollutants.

You can read more about the new capabilities in the BAMS article on GEMS by Jhoon Kim (Yonsei Univ.) and colleagues. The article, appropriately, posted online within an hour of the launch of the satellite. 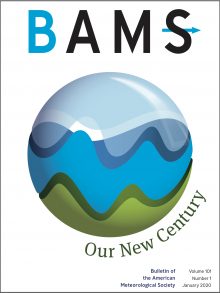 This is actually a twin launch: The GEMS article is among the first of the new-look BAMS in AMS Journals Online. You’ll find highly readable typefaces with a simple layout easier for scrolling on screen. You’ll also note that we’re starting to publish articles as soon as they’re ready for launch, rather than waiting for them to collect into issues in print.

Also about to launch into the mail is a whole new approach BAMS is taking to print as well. The magazine is much more dense with important and exciting new information. The printed features (mirrored as well in the digital edition for AMS members) are short, highly accessible versions of the peer-reviewed research articles. We’re expanding our focus on new and important articles to relay the authors’ thoughts—in their own words—about their work and the challenges they’re solving in their next articles as well. This blog and AMS social media will reflect such thought-provoking new BAMS content in all sorts of ways—for reading, listening, and watching.

So GEMS is our partner in launch: a new era of air quality monitoring for Asia is paired with a new era of communications for AMS. As they say in the media..stay tuned, more to follow!