From his book and PBS-TV series, “Earth: The Operator’s Manual,” to his renowned lectures at Penn State, Dr. Richard Alley is known for his humorous descriptions about serious science. Today he is the featured speaker as the 98th Annual AMS Annual Meeting begins in Austin, Texas. 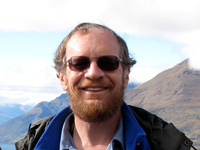 At the 18th AMS Presidential Forum  (4 pm, Ballroom D) Dr. Alley will use his unique brand of communication to discuss why communicating science to the public is no longer optional, but rather an imperative.
Dr. Alley, a renowned glaciologist and climate scientist, has a way with words. His colorful metaphors–like The Two-Mile Time Machine, the title his award-winning popular book about ice cores–put complex scientific issues into a comfortable perspective for perplexed audiences.
Last May, a couple months before a large piece of Antarctica’s Larson C ice shelf broke off,  Rolling Stone published an article about  potential catastrophic collapse of West Antarctica ice. In it, Dr. Alley explained that the Larson C breakage would not necessarily be an “end-of-the-world screaming hairy disaster conniption fit.”
And here, transcribed from a 2012 talk at the Smithsonian in which Dr. Alley explained the impact of burning fossil fuels and releasing CO2:

“You fill up a car and it’s a fairly big tank–you’re putting in a hundred pounds of gasoline. If you had to bring it home in gallon jugs it’d be a different world. But you drive off with it. And when you burn it — you add oxygen — and that makes CO2, and it goes out the tailpipe and you don’t see that 300 pounds per fill-up. Now, our students really get a kick out of it: at this point you say okay, suppose that our transportation system packaged the CO2 in a way we could see it … as horse ploppies…It’s a pound per mile driven for a typical vehicle in the fleet at this point. Ya know … Nnnnn — thffft. Nnnnn — thffft …. Our CO2 turned to the density of horse ploppies and spread over the roads of America would cover every road in America an inch deep every year. On average. Okay. In a decade … there are no joggers. We’d all be cross-country skiers. If we saw this it would be a completely different world. But it just drifts away and we don’t even see it.”

Sunday’s keynote talk at the Presidential Forum is likely to be just as, ummm, vivid. Simple but powerful. Definitely memorable.
It’s exactly the way Alley envisions engaging the public: by building the broad understanding necessary to make science actionable.