A good writer inevitably is also a good listener, always mining every conversation and interaction for the next gem that could be used in their work. Authors of AMS books are no exception, and this week in Austin you could be the person to provide one of them with a new idea or angle. A collection of authors will be reading from their works and participating in Q&A sessions with meeting attendees, providing you with an opportunity to discuss your interests with them and learn more about the writing process.
The events will take place on Tuesday and Wednesday at the AMS Resource Center in the Exhibit Hall. The Tuesday session will feature historical topics, with Bob Reeves exploring the history of long-range forecasting (4:oo PM), Jen Henderson speaking about Ted Fujita (4:20), Paul Menzel (4:40) and John Lewis (4:55) discussing Verner Suomi, and Lourdes Avilés looking back at the Great New England Hurricane (5:10).
Wednesday’s event will focus on science and society: Matt Barlow will speak about his forthcoming handbook for atmospheric dynamics (4:00 PM), Bob Henson will discuss climate change science and policy (4:20), and Bill Hooke (4:40) and Bill Gail (5:00) will consider the human relationship to climate.
A unique aspect of AMS books is the collegiality between the authors and their readers, and with this event we invite you to get to know some of them better and perhaps even help them with their craft. It’s the collaborative process at work!

By William Haggard, CCM
(This post is adapted from the Introduction to the author’s new AMS book, Weather in the Courtroom: Memoirs from a Career in Meteorology. You can purchase the book from the AMS Bookstore here.)
I have been very fortunate to have had many wonderful experiences, and to have known at age 4 that I wanted to be a weather man. Being a forensic meteorologist was exciting, challenging and filled with the fun of meteorological detective work. The purpose of writing my new book, Weather in the Courtroom, was to share some of the significant cases in which I played a part. One goal was to choose interesting cases, and another was to show the variety of weather situations that can affect litigation. 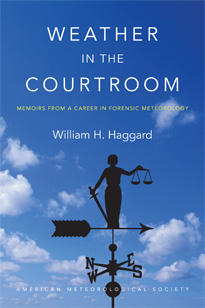 While serving as the director of National Climatic Data Center (NCDC) between 1963 and 1975, I had been impressed by the large number of attorneys requesting weather data for litigation cases. The center would offer data certified by the Department of Commerce but government meteorologists could not be released from their duties to interpret this data in the courtroom. This void was filled by consulting meteorologists.
I decided that after retirement from the federal government I would become a consulting meteorologist specializing in forensic work. This specialty would allow me to bring weather testimony into the courtroom. In 1976, I formed the Climatological Consulting Corporation (CCC) and sent letters of introduction to lawyers listed in legal directories who appeared likely to need weather testimony in their litigation. They included aviation, marine, and insurance lawyers.
The first response came several months later from Charles Hagan in Anchorage, Alaska, who needed an expert weather witness in a plane crash. Though the weather analysis was complex, I was faced with the great challenge of learning courtroom procedures and the behavioral techniques that would convince the jury that I was a credible witness. I learned the importance of effective visuals with the concept that people retain 80% of visual information versus 20% audible.
When I started in this field, there might have been up to 50 other forensic meteorologists. Few were using visuals to show the details of their analysis and to illustrate the weather to the courtroom. I quickly learned the importance of these images and spent a lot of time trying to improve them. I greatly appreciated the help of my wife, Martina, an accomplished artist, who designed and perfected many of them. We started with hand drawn poster boards and evolved to large, commercially produced color images.
From there, I graduated to carrying an overhead Vugraph projector and screen to display transparencies to the court. I became known as the man with the pictures. My expensive analysis projector in the 1980s, which could project a time-lapse sequence of images, was a great improvement in showing sequential radar images. First used in a case of a ruptured oil tank in Hurricane Alicia, the jury was convinced of my testimony after seeing the rainbands moving over the stationary image of the tank on the screen. With time and technology, televisions were installed in courtrooms, strategically placed before the jury, judge, and council. Computers and computer simulations have now taken over.
After a slow start, word of mouth advertising, attending various lawyer conferences, and hard work all helped increase my business. Meeting and working with so many talented attorneys and staff was a great experience. My staff increased, my travel increased, and my lifelong passion of working with the weather continued. We worked on hundreds of cases varying from simple “slip and falls” to complex weather patterns such as those found in the Perfect Storm of 1991.
I had taken the challenging test and been the 150th to obtain my CCM from the AMS. As the caseload increased, I realized the need for more specialized interpretation of satellite data, hydrology, radar, and severe weather. I began affiliating with other CCMs in these subspecialties to better meet the client’s needs. These associates greatly assisted me in their specialty and enhanced the final work product.
I grew up sailing, served in the navy, and was an oceanic weather forecaster. I had expected marine meteorology to be the cornerstone of my courtroom work, but aviation became predominant until late in my consulting experience. The aviation attorneys that engaged me became frequent clients and spread the word. Approximately 75% of my over 200 cases involved aviation weather. The data required are somewhat different for aviation and marine cases, but were all are available from the National Climatic Data Center.
With these data I began my detective work. Forensic meteorology requires careful and accurate retrospective weather reconstructions. These often required very detailed and small time/space scale analyses—frequently relying on supplemental and/or non-standard meteorological data such as eyewitness statements, photos, police reports, NTSB reports, site visits. The great improvements in meteorological technology, in the resolution of meteorological images, and in the availability of the data all helped in my analyses of the weather.
After I moved to Asheville in 1961, my wife and I had purchased a hilly 100-acre farm east of Asheville. In 1975, we built our dream house there and I started my new company in the den with one secretary and a graphic studio area in the large basement. As the staff grew in size, we moved to a remodeled house near the creek. This location, overlooking large pastures, was a beautiful setting for the next 20 years. When I became frustrated by a technical problem, I would announce to the staff, “I’m going out to mow,” and would climb on my riding mower. Nature’s panorama of blue skies, white clouds, hillside forests and green grass helped clear my mind and was conducive to constructive thinking allowing me to return to the office with a fresh view and a mowed pasture. The five-minute walk from home to the office made it very convenient for me when I was not travelling. And I did travel extensively to meet clients, visit accident sites, testify in court attend depositions and meetings. I became a 1.6 million miler with Delta Airlines.
Writing this book has brought back fond memories of these great 26 years. I hope you enjoy it.