As we noted in the previous blog post, there are multiple ways to navigate an AMS Annual Meeting, even though we’re usually channeled into separate rooms devoted to parallel conferences, each focused on an area of specialization. But this year’s all-virtual conference, during the coming week, offers unusual prospects for hopping

from conference to conference, with room to follow crosscutting themes. One of the most active such themes this year is the relationship of extreme weather to climate change.

The Conference on Climate Variability and Change is a natural home for such presentations; for example, the poster on “The Principal Reasons for the Observed Increase in Atlantic Hurricane and Named Storm Activity,” by  Conor I. McMenemie  and Karl Zeller with NiCE Research.

It is known that sea surface temperatures (SSTs) are a key component for energizing equatorial Atlantic storms. Similarly that the SSTs in the region which germinate such events are largely dependent upon the duopoly of the surface temperature of the ocean currents flowing towards the equatorial Atlantic and the heating effect applied by the sun. There has been a significant loss of cloud cover. This has allowed for a corresponding increase in isolation, resulting in the increased SSTs which gives rise to the increased Named Storm and Hurricane activity. …a reduction in the frequency of the African Easterly Wave (AEW) weather system has allowed for an additional multi hundred terrawatt ocean heating effect, which is providing the additional ‘fuel’ for the storm and hurricane events. … The factors affecting the original precursors to the AEW system can be backtracked to the Ethiopian Highlands, where the confluence of a number of atmospheric events had given rise to this AEW climatic chain reaction. It will be suggested here that human activity had unintentionally made sufficient alteration to one of these precursors, in an area of uncommon meteorological vulnerability during the hurricane season. That as a consequence we had inadvertently degraded one of the planet’s major weather systems, which after being allowed to go unnoticed since the start of the last century, this is the principal reason for the observed increase in Atlantic Hurricane and Named Storm activity.

Anna M. Wilson et al  present a related poster in the same conference: “Efforts to Build Infrastructure Resiliency to Future Hydroclimate Extremes.” In their, they state:

Record-breaking storms are increasing in frequency with climate change. Aging infrastructure, increasing population, and land use changes are all exacerbating the impacts of these events on the human enterprise. Thus, infrastructure’s risk and resilience to unexpected events are changing in ways that we have not been yet able to precisely quantify. [We] highlight successful interdisciplinary efforts led by the water management community to reduce risk and build infrastructure resilience to an increasing frequency and complexity of events.

But not all the presentations in this crosscutting theme of weather extremes set in the context of climate change are in the same conference. For example Elizaveta Malashenko and Matt Rogers (McKinsey and Company) present a poster in the Conference on Weather, Climate, and the New Energy Economy about “Climate Risk and Response: Why, and How, Utilities Should Start to Manage Climate Change Risk.” They write:

The Fourth National Climate Assessment, released in late 2018, … predicted “more frequent and intense extreme weather and climate-related events,” such as floods and hurricanes. For utilities, the assessment concluded, the possibilities were grave: lower efficiency, higher expenses, and more power outages—even as demand for energy rises. And many utilities are not ready … The cost of extreme weather is already high, and the frequency and the cost to life and property of extreme weather events has increased in recent years. …Even now, some utilities are making investments in long-lived assets in risky locations, increasing system vulnerability and balance-sheet risk. On that basis, we believe there is a strong case for utilities to start now to take steps on climate-change adaptation.

In other ways, too, utilities are already more vulnerable to extreme weather events than in the past. When homes are built in areas prone to wildfires, power companies follow, placing their own assets at higher risk. These can even exacerbate the problem, if sparks from power lines ignite [wildfires]. …

If climate change brings significant sea-level rise, as many models predict, that raises new vulnerabilities, but the risk is material today. In the United States, nine nuclear-power plants are located within two miles of the ocean. Many of the nation’s 8,625 power plants were deliberately sited near shorelines in order to have access to water. As a result, when hurricanes strike, power plants already face significant flooding damage. … 44 power plants were in flooded areas in Hurricane Irene and 69 were in flooded areas in Hurricane Sandy. … During Houston’s Hurricane Harvey in 2017, wind and catastrophic flooding knocked down or damaged more than 6,200 distribution poles and 850 transmission structures; 21.4 gigawatts of generation were affected by wind damage, flooding damage, fuel supply issues, or evacuations and shutdowns. If sea levels rise, storm surges would hit further inland, causing more damaging coastal flooding to generation, transmission, and distribution infrastructure.

We examined the financial records of ten large power utilities in seven states where hurricanes are common plus New Jersey, where hurricanes are less common but dense coastal populations mean damage from storms can be particularly costly. According to this analysis, a typical utility saw $1.4 billion in storm-damage costs and lost revenues due to outages caused by storms over a 20-year period [and] using estimates from the Fourth National Climate Assessment for increases in extreme weather events and coastal infrastructure damage driven by climate change, we estimated that by 2050, the cost of damages and lost revenues would rise by $300 million. We estimate it would take $700 million to $1 billion for a typical Southeastern US utility to prepare for impacts related to climate change [and] … our conclusion is that it pays to prepare for extreme weather.

At the Symposium on the Coastal Environment, Chia-Ying Lee (Lamont–Doherty Earth Observatory) et al. use historical and future climate warming scenarios and downscaled modeling to generate model storms. A new, machine-learning based wind reconstruction model will be used with the model tropical cyclone tracks to assess the wind hazard in New York State and … estimate storm surge.

In the Conference on Hydrology, Eunsang Cho (Univ. of Maryland) et al. present on whether we should expect Slower or Faster Extreme Snowmelt in a Warmer World. Their findings indicate that so far such flood-producing events are less frequent in the western mountains but more frequent in the north-central states.

In the Symposium on Societal Applications, John Lee is presenting “Applications of Extreme Event Attribution: Climate Change Litigation and More.” His abstract explains:

As the science underlying extreme event attribution (EEA) continues to improve … EEA … will play an increasing role … in climate change litigation, both domestically and internationally. Causation, legally defined as the relationship between an event and a particular result, is a key component in such litigation. In other words, in this context, how can you prove that a defendant’s actions are sufficiently related to anthropogenic climate change such that the defendant can be held liable for damages that occur at a distant location? EEA addresses that question. EEA also is playing an increasingly important role in the insurance industry … to model and … prepare for future losses. As the climate changes, human rights impacts, from military conflict to forced migrations, become increasingly likely. EEA has an important role to play in the characterization and prediction of such environmental human rights abuses … [among other examples] … providing an additional tool to aid in mitigating these events.

Also in the conference on Climate Variability and Change, Ni Dai and Brian Soden (Univ. of Miami, FL) investigate the implications of climate change for tropical precipitation extremes. They point out that:

In the second session of “Major Weather Events and Impacts of 2020,” Blair Trewin (Bureau of Meteorology) et al. present on “Australia’s 2019/20 Summer of Extremes and Its Climate Drivers.”

They document the exceptional heat and drought underlying the year’s deadly conflagrations. But they also note:

Several key climate drivers contributed to the dry and warm conditions in 2019, despite limited signals from the El Niño-Southern Oscillation, typically a major driver of eastern Australian drought. The strongest signal on seasonal timescales was a very strong positive phase of the Indian Ocean Dipole (IOD). Positive IOD events are associated with an enhanced likelihood of below-average rainfall in winter and spring across much of Australia, especially the south.

A second major driver of abnormal conditions was a persistent negative phase of the Southern Annular Mode (SAM). Negative phases of SAM in spring and summer are associated with enhanced risk of dry conditions along the east coast of Australia. The major contributor to the negative SAM phase was a rare Sudden Stratospheric Warming event over the Antarctic which peaked in mid-September, causing an early breakdown in the polar vortex and equatorward movement of mid-latitude westerly winds. A delayed monsoon also contributed to an abnormally dry November and December in northern Australia. … The conditions of 2019-20 were without precedent in the Australian historical record. As the climate warms, the world is seeing more extreme events outside the range of previous historical experience, with the scale of the wildfires of 2020 in the western United States analogous in some ways to the preceding summer in Australia.

Recent changes in low-frequency atmospheric circulation around Greenland, including as a result of accelerating Arctic amplification, have increased sensible heat and moisture advection from the mid-latitudes into the region.We explored the frequency and seasonality of extreme Greenland blocking in both past and future climates. Our findings are analyzed in context of other work on extreme weather and climate events, and future work is suggested on the role of moisture transport in developing or sustaining blocks over Greenland.

Also in the Climate Variability and Change conference, Bin Fu (Environment Canada) et al. present a poster earth system model ensemble finding that “projected trends of North American extreme temperatures over the next half-century are likely very uncertain and need to be applied with caution.”

And again the same conference, Salvador del Cos Garza (City College of New York) et al. present a poster in which they note the devastating effects of the 135 mph gusts from Hurricane Maria that are unprecedented in Puerto Rico. They study the effect of a warming Climate on return periods of extreme wind and precipitation in the Caribbean using bias corrected GCM Models. They found that Hurricane Maria level wind gusts are likely to occur far more often, from a 400-year occurrence event in current climate to once in a century events by the year 2100. Rainfall had a similar effect where events whose rainfall intensity occurred once every 500 years in observation are turning into once a century events. They conclude: 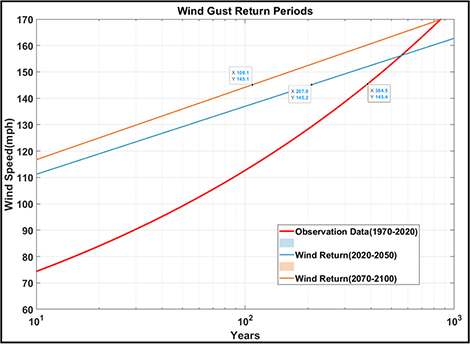 The increase of wind speed and precipitation may be directly linked to the increase of Sea Surface Temperatures (SST) as a key driving force of Caribbean climate change and a strong indicator of extreme events. Current trends of SSTs are in the order of 0.15⁰C/decade, while future trends appear to accelerate to 0.7⁰C/decade at the end of the Century. The increased rate of occurrence of extreme events will negatively affect the longevity of the physical infrastructure. 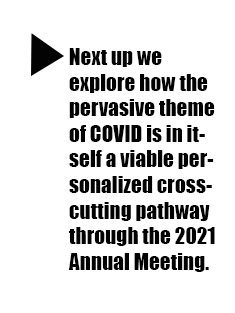 We have additional presentations detailing a variety of aspects connecting extreme weather to climate change, so check back in with this post as we approach the Annual Meeting. You also will want to check The Front Page for new posts highlighting other salient crosscutting themes, the struggle for social justice and equity, and citizen science.