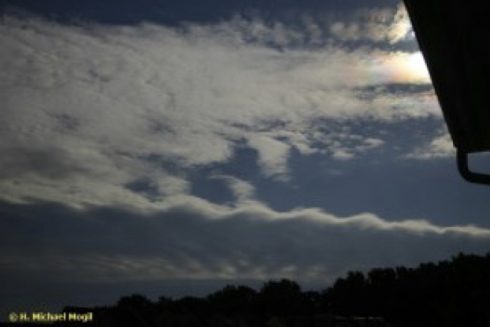 Editor’s note:  Whether you’re in isolation or reemerging, we hope this guest column feels like a perfectly meteorological way to reconnect with the world. Read Mike’s full blog post here and more of his photos here. Above: Corona and wave clouds.

First there was “The Mentalist,” the hit CBS series that focused on Patrick Jane’s (played by Simon Baker) ability to use his mind to find clues, piece them together and, in the process, mess with the minds of others.

Now comes “The Observationalist,” played by yours truly.

I didn’t assume the role. Rather, Joseph Williams Jr.  assigned it.  Williams was a counselor and science assistant at Howard University’s summer 2009 weather camp and I was the camp’s director. Williams caught me “observing everything around me—bricks on walls, sidewalks, people, and especially the clouds.”  Shortly after giving me my alter ego, Williams started becoming an observationalist himself.  He told me that he had never looked up to see the clouds (even though he was a graduate chemistry major).

In fact, developing keen observational skills is what most detective shows and movies are all about.  The key questions are: “What do you see?” and, more importantly, “What DOESN’T fit?” What doesn’t fit is typically out of place for a reason (usually, but not always, related to the crime).

I don’t solve too many mysteries in real life (although I do get involved a bit as an expert witness in event reconstruction for weather-related lawsuits).  But as a practicing meteorologist, I have to always look for weather-related clues in the clouds, radar and satellite images and even computer model weather forecasts.

In a similar sense, my wife and I operate a math-tutoring center in Naples, FL.  Here we emphasize that solving math problems is much like solving a crime.  What information is there, how do the pieces fit together, who did it (a.k.a., the answer)?  The numbers have patterns that beg to be discovered.  My goal is to have everyone be better observers.

Most other professions require keen observational skills (although they are often not emphasized). Football quarterbacks have to be consummate observers to scan the field and find an open receiver. Artists have to “see” their world in order to paint it.

But one doesn’t need a career to be an observationalist. Just look at patterns in our natural world. For example, I love the banded patterns in many cloud types and the patterns within flower heads and waves at the beach. Take me on a road trip through the Desert Southwest and I am in awe at the rock formations that grace the landscape.

And, I ALWAYS grab a window seat on the airplane. After all, it is the closest I will ever come to being an astronaut, so why not observe the Earth as most others do not?

I am not sure where and when I became an observationalist. But, I know I was already one at nine years old (that’s back in 1954). I recall watching from my New York City apartment window as several hurricanes blew past. I also watched winter cloud lines march southward down the Hudson River. These observational experiences clearly pushed me over the brink and into a weather career.

Yogi Berra really nailed it when he said, “You can observe a lot by just watching.” You really can!