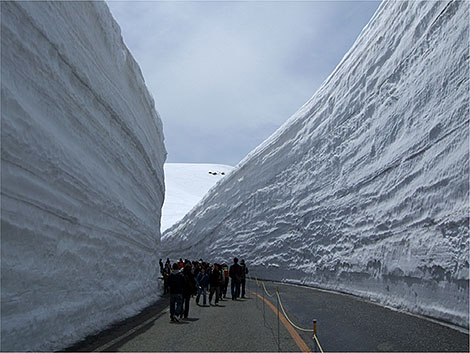 North American meteorologists, welcome to the snow climate of western Japan. Every year in winter lake effect-like snow events bury coastal cities in northern and central Japan under 20-30 feet of snow. Above is the “snow corridor” experienced each spring when the Tateyama Kurobe Alpine Route through the Hida Mountains reopens, revealing the season’s snows in its towering walls. The Hida Mountains, where upwards of 512 inches of snow on average accumulates each winter, are known as the northern Japanese Alps.

The tremendous snow accumulations largely occur from December to February during the East Asian winter monsoon when sea-effect snowbands form behind frequent cold outbreaks. But their snowfall isn’t just pretty to look at and play in — extreme snowfalls combined with dense populations in cities adjacent to the Sea of Japan such as Sapporo (pop. 1.95 million) are public safety hazards, turning exceptionally deadly every year. On average 100 people die and four times that number are injured from snow and ice in Japan, not only from snow removal but also from “roofalanches” — masses of snow sliding off roofs onto people.

Similar to their counterparts downwind of North America’s Great Lakes, the Sea of Japan snowbands invite research from Japanese scientists and those in many other locales where bodies of water enhance snowfall over populated lands. A new paper in BAMS by Jim Steenburgh (University of Utah) et al. not only highlights what’s known about the Japanese snow events but also is designed to “stimulate increased collaborations between sea- and lake-effect researchers and forecasters in North America, Japan, East Asia, and other regions of the world” who can collectively realize the “significant potential to advance our understanding and prediction of sea- and lake-effect precipitation.”