We’ve seen plenty of examples of scientists inspiring art at AMS conferences. It is also true that art can inspire scientists, as in the kick-off press conference at this week’s European Geophysical Union General Assembly in Vienna, Austria. 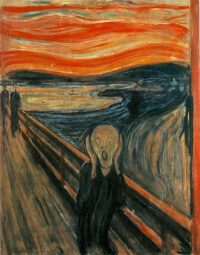 A team of scientists came forward with a new hypothesis about the origins of one of the icons of Western art–Edvard Munch’s The Scream. Since 1892, the man melting down on a bridge under a wavy, blood-red Oslo sunset has been a pillar of the modern age precisely because it expresses interior mentality more than objective observation. Or so art history tells us.
To be fair, some art historians also have made clear that there are honest clouds in Munch’s painting. In a 1973 monograph, the University of Chicago’s Reinhold Heller acknowledged Munch’s “faithfulness to meteorological and topographical phenomena” in a precursor canvas, called Despair. Even so, Heller went on to say that Munch’s vision conveyed “truthfulness solely in its reflection of the man’s mood.”
Take a Khan Academy course on the history of art and you’ll learn that Munch was experiencing synesthesia—“a visual depiction of sound and emotion….The Scream is a work of remembered sensation rather than perceived reality.”
Leave it to physical scientists, then, to remind us that nature, as an inspiration for artists, is far stranger than art historians imagine. Indeed, faced with The Scream, scientists have been acting just like scientists: iterating through hypotheses about what the painting really shows.
In a 2004 article in Sky and Telescope magazine, Russell Doescher, Donald Olson, and Marilynn Olson argued that Munch’s vision was inspired by sunsets inked red after the eruption of Krakatau in 1882.
More recently, atmospheric scientists have debunked the volcanic hypothesis and posited alternatives centered on specific clouds. In his 2014 book on the meteorological history of art, The Soul of All Scenery, Stanley David Gedzelman points out that the mountains around Oslo could induce sinuous, icy wave clouds with lingering tint after sunset. The result would be brilliant undulations very much like those in the painting.
At EGU this week, Svein Fikke, Jón Egill Kristjánsson, and Øyvind Nordli contend that Munch was depicting much rarer phenomenon: nacreous, or “mother of pearl,” clouds in the lower stratosphere. They make their case not only at the conference this week, but also in an article just published in the U.K. Royal Meteorological Society’s magazine, Weather.
Munch never revealed exactly when he saw the sunset that startled him. As a result, neither cloud hypothesis is going to be confirmed definitively.
Indeed, to a certain extent, both cloud hypotheses rest instead on a matter of interpretation about the timing of the painting amongst Munch’s works, about his diary, and other eyewitness accounts.
The meteorology, in turn, is pretty clear: The Scream can no longer be seen as solely a matter of artistic interpretation.