Louis Uccellini, director of NOAA’s National Weather Service, now says he doesn’t even remember exactly why he went to Bob Glahn’s office to talk that day. It was to continue a debate on some point or another, 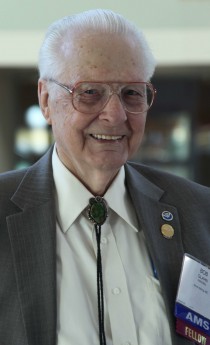 Uccellini told the audience in a keynote for the Symposium honoring Glahn this morning.
“But I do remember what happened when I walked into the office,” Uccellini said. “I actually walked in and he wasn’t there, and I saw he had this big anthology of Robert Frost. I’ve read two biographies on Frost, I have my own books and all. I just started paging through it.”
An inevitable connection was forged. For the next half hour the two meteorologists talked not about their views on modeling but about the art of a mutually revered poet. Glahn told Uccellini his favorite Frost poem was  “Stopping by Woods on a Snowy Evening.” Uccellini says

Bob assumed that because ‘Snowy’ was in the title that it was my favorite too. I disappointed him, but it’s really a fantastic poem, obviously, from a poetry perspective. The structure of it where the end of the third line in one stanza sets the rhythm and rhyming of the next stanza. Frost said he wrote this thing in about an hour. Came off the farm and this thing had been going through his head. Just blasted it down. You think it’s just about a nice walk in the woods or a ride in the woods and then you get to the last stanza and it just hits you with one of these dark aspects. This really is the basis of his poems.
A friend of mine sent me a book with all of Frost’s letters to his children, and I came across this phrase. I actually mentioned this to Bob once, about this particular phrase: ‘All poetry has said something and implied the rest. Well, then why have it say anything? Why not have it imply everything?’
This really struck for me because, as a scientist, this is almost a crime. You’ve got to have everything exact, what you mean—and this is just the opposite. For me poetry is a release valve and I was wondering why Frost’s poems captured Bob’s attention. I think it was for the same reason.

It was a powerful statement of the creative exactitude with which Glahn reshaped the way meteorologists forecast weather by combining numerical prediction with statistics and probabilities, using mathematics to express a human dimension to meteorological products.
And Uccellini’s favorite Robert Frost poem? “Looking for a Sunset Bird in Winter.”
Plenty of snow, of course.
[Above: photo of Bob Glahn by Sean Potter/NOAA/NWS]