Some AMS Annual Meeting attendees may have been surprised when Andy Revkin pulled out his guitar at the Presidential Forum on Monday. Maybe they didn’t know that Revkin is an accomplished songwriter and performer who has already recorded an album. But they certainly appreciated that singing about the perils of flash flooding in Colorado is a way for Revkin to show by example what he means when he writes:

. . .the gap between information and impact can also be substantially reduced (without a large financial cost) simply if more scientists and scholars, and their institutions, think creatively about ways to expand their communication circles and pathways.

Even for those of us who can’t croon, Revkin’s advice should not fall on deaf ears. This year’s meeting provides many examples of scientists with a penchant for creative communication. We’re thinking of, for example, the weather wordsmiths who came up titles like “Science with a Vengeance” and “Confessions of a Faculty Convert”; who came up with terms like “CubeOpera, ” “Consensus Gap,” and “Extreme Citizen Science.” Or who are willing to do this in a parked car to demonstrate the dangers of heat.
Qingcun Zeng is one of our many talented community members who can go the extra mile for creative climate communication. Zeng is one of the three newly anointed AMS Honorary Members who will be honored at tonight’s banquet (more on all of them, shortly, in this blog). His research interests have ranged from general circulation modeling to climate change, but his abilities as a poet and translator fit perfectly with the ongoing discussions here about thinking a fresh ways of talking about science and nature.
Here is a selection of his verse (the first two of the set of four shown in his elegant calligraphy and then in translation below). We hope it motivates you to do a little “extreme communicating” of your own: 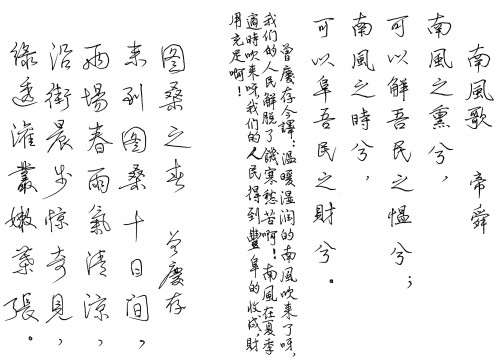 Four Seasons in Beijing Suburb
Qing-Cun Zeng
1. Early Spring
Spring blooms just on the Equinox,
Tender yellow leaves of young grass appear over moist soil near creeks.
Northerly gusts blow away depressive russet flowers from high poplar’s branches,
While peach trees by the warm southern wall of houses,
are happily in blossom like glittering red dress.
2. Thunderstorm in Summer
Darkening sky and deep rumble of thunder stop my writing,
Suddenly appears heavy rain, rotating wind, followed by clear sky.
It is a wonderful moment to look around and see far into the horizon,
An endless vision of blue mountains and green fields.
3. Deep Autumn
Lotus leaves are harvested, with their broad roots for a delicious dish,
The golden color and fragrant smell of rice fields follow the cool westerly wind.
Innumerable high-flying cirrus arrays cast no shadows on the ground,
The majestic blue mountain ranges are ready to receive the tired setting sun.
4. Auspicious Snow in Late Winter
There was a lunar halo with faint moonshine last night,
Heavy snowflakes like innumerable goose plumes,
filling the sky the following morning,
As the snow begins to melt I feel even colder than during snowfall,
But my heart is warm with excitement about the prospect of a good wheat harvest.