The scientific benefits of Earth observation are well known in the atmospheric sciences. But there’s an artistic side to such observations, too, which is spectacularly depicted in the U.S. Postal Service’s new Earthscapes stamps, released last week in celebration of National Stamp Collecting Month and featuring images shot aloft from a variety of platforms, from a micro-light kite to satellites in space.
The set of 15 different stamps depicts natural, agricultural, and urban scenes from across the country. The Service’s contracted photo editors and researchers culled hundreds of images, which USPS Art Director Howard Paine narrowed down to the final 15. Some photos were taken by people in private planes and helicopters; others were taken by unmanned instruments, including the one below of the volcanic crater of Mount St. Helens in Washington, which was captured in 1999 by NASA’s Landsat 7. Other images in the set include ice breaking off from Alaska’s Bear Glacier, a cherry orchard in Wisconsin, and a cranberry bog in Massachusetts.
Along with the forever stamps, other Earthscapes collectibles for the philatelist include a first-day cover set, a jigsaw puzzle, and an Earthscapes ceremony program. 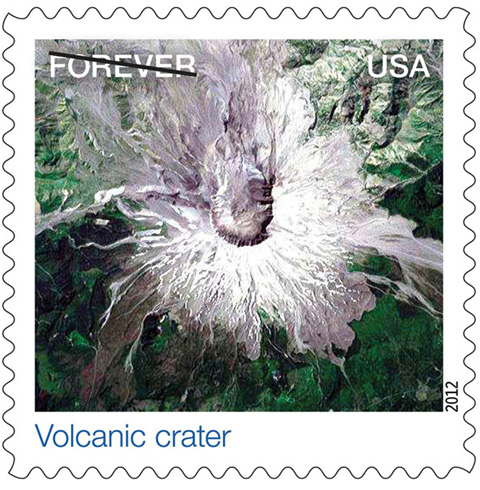