This past July was the hottest month on record in U.S. history, according to NOAA’s National Climatic Data Center. The average temperature throughout the contiguous 48 states was 77.6°F, surpassing the previous mark of 77.4°F set in 1936. The first seven months of 2012 were also the hottest on record in the United States, as was the 12-month period of August 2011-July 2012. (Records go back to 1895.)
Interestingly, only one state–Virginia–experienced its hottest July on record, which goes to show how widespread the heat wave was across the country. Thirty-two states had one of their top-10 hottest Julys of all time this year, with seven states recording their second-hottest ever. July temperatures were 3.3°F warmer than the U.S. twentieth-century average for the month, with particularly intense heat  in the Plains, the Midwest, and along the Eastern Seaboard.
The five hottest individual months in U.S. history have all been Julys: 2012, 1936, 2006, 2011, and 1934.
In addition to the historic heat, the U.S. Climate Extremes Index, which NOAA uses to calculate temperature anomalies, severe drought, downpours, tropical storms, and hurricanes, was a record-high 37% in July; the previous maximum occurred last July. And the index for the first seven months of the year was 46%, breaking a 78-year-old record. The average index is 20%.
.”] 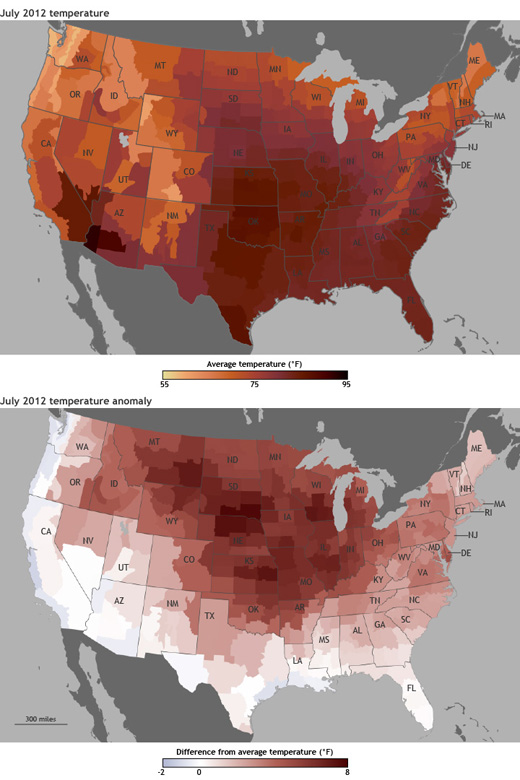