National Weather Service offices in Missouri and Kansas recently initiated an experiment testing new tornado warnings that combine more specific information with more descriptive language than have been used in the past to describe the potential effects of storms. The experiment is called “Impact Based Warning,” and is meant to bluntly tell residents in the path of tornadoes what could result if they don’t seek shelter. By using phrases such as “complete destruction” and “unsurvivable if shelter not sought below ground,” the NWS is hoping to “better convey the threat and elevate the warning over a more typical warning,” according to Dan Hawblitzel of the Pleasant Hill, Missouri NWS office.
The new alerts got their first big test last weekend when more than 100 twisters were reported in Kansas, Oklahoma, Nebraska, and Iowa. While the NWS’s Storm Prediction Center issued a warning of possible life-threatening storms in several midwestern states days before they touched down, in Kansas the words used in the new alerts were particularly trenchant: “You could be killed if not underground or in a tornado shelter. Many well-built homes and businesses will be completely swept from their foundations.” And the warnings seem to have worked. Despite the large number of storms, only six people were killed—all in an overnight tornado that hit Woodward, Oklahoma. In Wichita, Kansas, a twister tore through a mobile-home park during nighttime hours, but there were no fatalities.
The Impact Based Warning experiment was developed by the NWS in consultation with social scientists. Along with the new vernacular, it includes some key additions to regular tornado warnings, including information that identifies the hazard (hail, winds, tornado, etc.), indicates whether the hazard has been spotted by radar or by people on the ground, and describes potential effects of the hazard (loss of life, damage to trees or buildings, etc.). The warnings can be used not only for tornadoes, but also to signify life- or property-threatening thunderstorms. The experiment is scheduled to run through the end of November, at which point it will be evaluated and considered for more widespread use.
The initiative comes 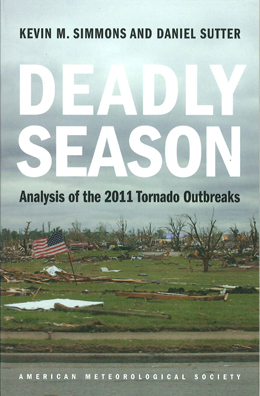 just one year after tornadoes killed more than 500 people in the United States—the deadliest season in almost 60 years. The 2011 year in tornadoes is examined in the new AMS book, Deadly Season: Analysis of the 2011 Tornado Outbreaks, by Kevin M. Simmons and Daniel Sutter. The book is a follow-up to the authors’ Economic and Societal Impacts of Tornadoes, published by AMS in 2011. The new title looks at possible factors contributing to the outcomes of 2011 tornado outbreaks, including assessments of Doppler radar, storm warning systems. and early recovery efforts. Both books can be purchased here.