The Atmospheric Science Librarians International (ASLI) announced their ASLI’s Choice Award winners for 2011 on Wednesday afternoon in the exhibit hall. The awards, now in their seventh year, are presented for the best book of the year in the fields of meteorology/climatology/atmospheric sciences and are judged in the following categories:

In keeping with the Annual Meeting’s technology theme, the winning book in the science category was SCIAMACHY: Exploring the Changing Earth’s Atmosphere, edited by Manfred Gottwald and Heinrich Bovensmann, published by Springer. ASLI noted the book provided a “comprehensive summary of the milestone SCIAMACHY mission from its initial conception to most recent results.”
There were two honorable mentions in the science category: The Global Cryosphere: Past, Present and Future, by Roger G. Barry and Thian Yew Gan, published by Cambridge University Press, awarded for “the depth and breadth of its coverage of the major aspects of the cryosphere”; and Physics and Chemistry of Clouds, by Dennis Lamb and Johannes Verlinde, published by Cambridge University Press, for “its data-rich, yet readable exploration of clouds across a range of scales.” 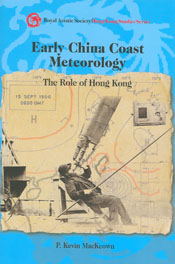 Awards were also given in the history category. The winner was Early China Coast Meteorology: The Role of Hong Kong, by P. Kevin MacKeown, published by Hong Kong University Press, which ASLI lauded for “its account of the scientists and science that comprise the history and accomplishments of the Hong Kong Observatory.” Honorable mention in the history category went to The Warming Papers: The Scientific Foundation for the Climate Change Forecast, edited by David Archer and Ray Pierrehumbert, published by Wiley-Blackwell, awarded “for a compendium of the key scientific papers that undergird the global warming forecast.”
Congrats to all the winners, and it’s never too early to start thinking about next year’s meeting: If you read a good book published this year, you can nominate it for the 2012 award at this page.