The floodwaters of the Mississippi River continue their inexorable flow toward New Orleans and the Gulf of Mexico. Residents in Louisiana’s Atchafalaya Basin–most of them, anyway–continue to pack up their belongings and evacuate their homes after the opening of the Morganza Spillway (video of the opening can be seen here), which is diverting 763,000 gallons of water per second from the bloated Mississippi, but now threatens the homes and properties of as many as 25,000 people in the Atchafalaya River basin.
Meanwhile, other communities are already starting the recovery process from the flooding. In Memphis, Tennessee, the river is slowly receding after unofficially cresting at 47.8 feet last Tuesday, the second-highest level ever recorded in the city (it reached 48.7 feet in 1937). The satellite images below were taken by the multispectral imaging sensor called the Thematic Mapper on NASA’s Landsat 5 satellite. The top image shows Memphis in April of 2010, while the bottom image was taken last Tuesday, at the height of the flooding, with the flood waters clearly visible on both sides of the river. About 1,500 people in the Memphis area have applied for FEMA assistance in the wake of the flooding. (Photos courtesy of NASA’s Earth Observatory; more satellite pictures of the flooding can be found here.) 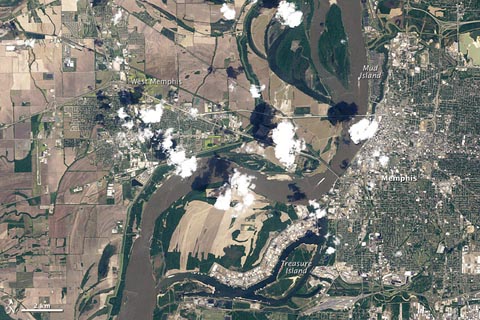 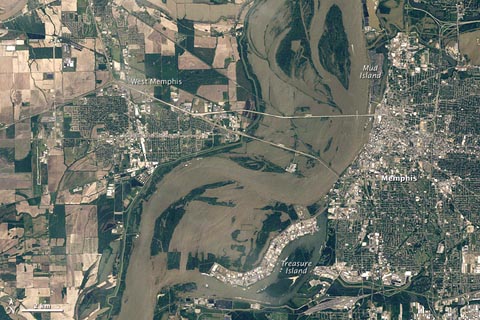