The storm system moving through the Midwest today met the usual criteria–one mb surface pressure drop per hour over 24 hours– for a “bomb”. We usually associate such rapid intensification and deep pressures with storms over the ocean, but this landshark of a storm this morning reached a low pressure stronger than a number of the Atlantic hurricanes this year. Says Paul Douglas in his Minneapolis Star-Tribune blog,

Welcome to the Land of 10,000 Weather Extremes. Yesterday a rapidly intensifying storm, a “bomb”, spun up directly over the MN Arrowhead, around mid afternoon a central pressure of 953 millibars was observed near Orr. That’s 28.14″ of mercury. Bigfork, MN reported 955 mb, about 28.22″ of mercury. The final (official) number may be closer to 28.20-28.22″, but at some point the number becomes academic. What is pretty much certain is that Tuesday’s incredible storm marks a new record for the lowest atmospheric pressure ever observed over the continental USA. That’s a lower air pressure than most hurricanes, which is hard to fathom.

The previous record for Minnesota was 28.43 inches, or 962.6 mb, was set at two stations, Austin and Albert Lea, during the 10 November 1998 storm.
At the Minnesota Climatology Working Group they refer to an even lower pressure over the continent, for the 26 January 1978 Ohio blizzard–28.05 inches. That storm is highlighted in a Monthly Weather Review paper on bombs over the eastern United States by Bruce MacDonald and Elmar Reiter. It deepened 24 mb in only 9 hours! 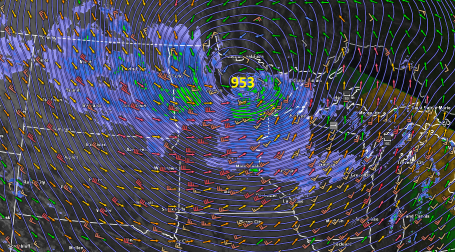 One blogger made “bomb cyclogenesis” the word of the day:

Sounds very terrorism-cyberpunk, doesn’t it? Sort-of-luckily for the state of Minnesota, it’s actually a meteorological term. I say “sort of” because bomb cyclogenesis will probably work out better for us as a weather phenomenon than it would as a tactic of the android jihad, but it’s still not great.

Douglas, Paul Huttner of Minnesota Public Radio, and others also referred to the storm as a “land hurricane.” The language makes it clear that such storms are not common over the continent.
Indeed bombs are usually a maritime phenomenon. However, not always. Often forgotten in such discussions of rapidly intensifying storms are some of the early parameters set forth in the classic paper by Fred Sanders and John Gyakum in Monthly Weather Review, 1978. In their climatology of “bombs,” they note that these storms are “primarily maritime” but also show significant frequency in the eastern United States–in other words, bombs are not particularly rare over land.
Sanders and Gyakum took the standard of 24 mb drop in 24 hours from Tor Bergeron’s earlier work on rapid intensification. In extending the Norwegian’s work, they noted that an equivalent intensification depends on latitude: at the pole it would be 28 mb/24 hours; at 25 degrees latitude it would be only 12 mb/24 hours. All of these rates qualify for what Sanders and Gyakum called “1 bergeron”. At a latitude of around 45 degrees North, yesterday’s pressure drop needed to be only 19 mb to qualify. (The latitude of Bergeron’s Bergen, Norway is above 60 degrees North.)
Among the many factors that separate ordinary extratropical cyclones from rapidly deepening bombs over land, MacDonald and Reiter noted that both the focus of rising air and surface convergence coincide closely with surface low. There’s also copious heating, including the large-scale latent heat release (condensing moisture) that intensifies as the storm matures. (For more factors, download the paper here.)
Here’s a Storm Prediction Center animation of the storm deepening in “bomb” mode.