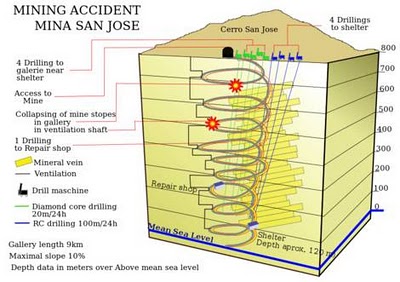 Now that all of the miners are safe, it is interesting to think about some of the meteorological aspects of the disaster–and of the misinformation provided by the media.
Some of the media suggested that the miners could get the bends from “rapid decompression”, but this is nonsense!
The level of the mine entrance, where the drilling is taking place, is at roughly 2400 ft above sea level, and the miners were trapped at a level a few hundred ft above sea level. Clearly, the pressure was higher where the miners were–roughly 8 % higher. And it took them about 15 minutes to make the change as they were lifted out. This is nothing to worry about! Virtually all of you experience this change many times each year. An example: drive to Snoqualmie Pass (elevation roughly 3200 ft) from the west. The last fifteen minutes you gain roughly the same elevation in the same amount of time! Or when you take off in a plane, take a long lift ride while skiing, take that gondola ascent on vacation, etc., you experience the same or worse!
Then there was the “steam” coming out of the hole (click on picture to see video):

Why the cloud coming out of the hole? The temperature down in the mine was very warm (90-105 from various reports) and there were sources of moisture down there. The air had sufficient water content that when it hit the cool nighttime air, it was cooled to saturation–thus the fog. It looked to me that temperatures were fairly cold during the evening rescues—40s F perhaps from the jackets people were wearing. A small contribution could also have come from the expansion cooling of the air as it rose.
The region surrounding the mine is very, very dry–in fact one of the driest places on earth…the Atacama Desert (see map). Some locations have never observed rain, and in others they receive perhaps a few hundredths of an inch per year. Why so dry? Sinking air from a subtropical high, the high Andes preventing moisture from moving from the east, 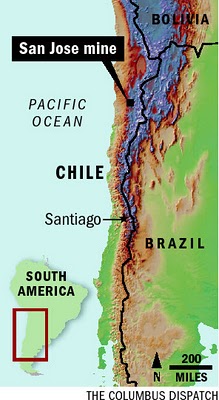