The AMS recently presented outgoing Journal of Climate Chief Editor Andrew Weaver with a plaque to thank him for his volunteer service to the Society. This is the beginning of a new tradition to honor every chief editor when they step down from their position, and it is appropriate that Weaver is the first to be recognized in this way, as during his term (2005-2009) the Journal of Climate grew significantly and earned consistently high ratings for its impact in the field of climatology. 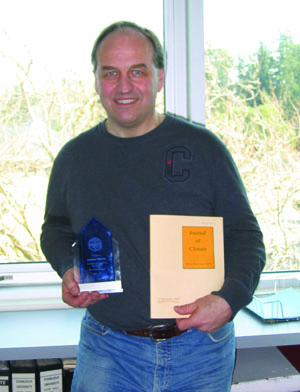 “It just so happens that our recognition of chief editors ending their tenure begins with one of the most successful of all the CE’s,” notes AMS Director of Publications Ken Heideman. “Andrew built on the foundation that others established before him and took it to a new level.”
As Heideman describes it, Weaver’s predecessors as Journal of Climate chief editor–NOAA’s Alan Hecht (1988), the University of Oklahoma’s Peter Lamb (1989-1995), and Colorado State University’s David Randall (1996-2004)–helped to establish the fledgling journal as a leader in climate research. By the time Randall handed the reins to Weaver, it was, according to Heideman, a “hot journal.  And then Andrew helped make it one of the hottest journals.”
During Weaver’s tenure, the Journal of Climate page count increased by almost 25%–from 5,400 to 7,000. More importantly, its ISI impact factor reached #1 in the category of meteorology and atmospheric sciences and was never lower than #4. The Journal of Climate has the most submissions and the most published papers of any AMS journal, as well as the most editors and editorial assistants. Weaver’s work sets a high standard for other chief editors.
“It’s amazing how much time Andrew put into the job,” says Heideman. “He routinely handled 100 papers a year by himself, and sometimes more. That was far above what we at AMS expected.”
For his part, Weaver found his time working with AMS “incredibly rewarding” and was especially pleased that he was able to keep up with what was happening in the field of climatology during a such a fertile period. His philosophy for the journal was simple and effective: do a good job in the editorial process, and the authors will come back.
“I’m most proud that the journal’s growth happened in the most tumultuous time in terms of climate politics, and we had no issues with that whatsoever,” he remembers. “Everything we did was just about the peer-reviewed science.”
As an organization led by its members, AMS relies on the volunteer spirit of people like Weaver not only to edit its journals but also to run nearly 100 boards, committees, and commissions.